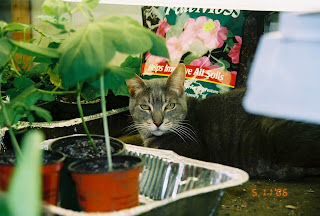 Who you calling psycho??
I had this psycho crazy cat named Claw, who was a grey tabby/Siamese.  She was MY cat and never showed affection towards any males in my life.  Claw always ran and hid when any were around.  I met this guy, who claimed to be an all around good guy, (which was a sure red flag), who came over to my apartment and here comes Claw jumping right into his lap.  She was friendly and affectionate and was loving all over him.  This was the first time she had ever shown a male any special attention and I immediately started thinking this guy must be the one.  He had to be.  Why else would she be loving all over this guy?

Well needless to say this "good" guy had a bad past that I didn't know about and the relationship ended.  I was confused for some time why Claw had acted the way she had with this guy.  It made little sense until I met my husband-to-be and Claw was back to her psychotic self.  She made it very clear that she wanted nothing to do with him.

It didn't take long for my husband and I to know that we were meant for each other and we got married.

It was sometime later that we realized that Claw's whacked out attitude over the bad guy was actually an indication that she was acting completely out of character and that somehow I was suppose to pick up on that clue.  It also explains why she went full tilt Claw on my husband, which meant, she knew my husband was the real deal and there was no way that Claw was giving him any special treatment!
Posted by 24 Paws of Love at September 19, 2011
Email ThisBlogThis!Share to TwitterShare to FacebookShare to Pinterest
Labels: cat, physco

Cats are so interested yet a little strange but I just cant own one :( my duo isnt very kitteh friendly :)

*we have a new site so please make sure to update your reader :)
http://houndgirl.com/

Cats definitely live in their own little world with their own special language!! Can never figure 'em out!! xoxo Chloe and LadyBug

Awwww! Everything I hear about your sweetie tells me you got a real catch. And if he wasn't frightened away by Claw, he's really special!

Claw does sound a little psycho but, now that you understand her language, you know to interpret her behavior the opposite of what we'd all expect! I'm glad that she picked out your husband... and I hope that Claw eventually accepted him!