The Boy and the White Dog 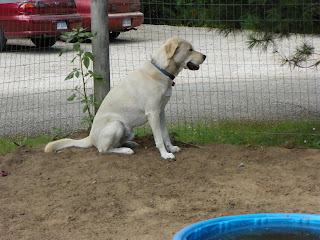 The big white dog took his stance, announced his turf and looked around wondering who would challenge him.  A young boy came from behind the line of trees to the open corner of the fence and the white dog met him with a simple warning bark. “ GO AWAY!”  The boy did not flinch or scream nor jump or run, he simply backed up slowly and walked away.

The boy watched the white dog with curiosity, questions posed deep in his mind, with the determination to try again.  The white dog had settled down as the boy carefully snuck behind the trees, giving it one last go to earn this dog’s trust.  Again the white dog slide into the corner and was stopped before he could bark.  The boy took to the trees as the white dog claimed his victory.

As I watched this interaction with pure fascination, I was completely entranced with this dance between a tough playing dog and a brave boy and was humbly brought to tears.  For three years I have seen the aftermath of the cruelty that children have done to this white dog and all it took was one to approach with simple love to make me believe again.


To the little boy, who tried with the determination and heart to get close a child-fearing dog, you gave a narrow minded woman a new found hope and opened her eyes to the possibilities.

Thank you for believing.  Your courage and love will not be forgotten.
Posted by 24 Paws of Love at September 14, 2011
Email ThisBlogThis!Share to TwitterShare to FacebookShare to Pinterest
Labels: boy, challenges, fear, love, trust, white dog

I am always amazed at the effects our dogs have on kids. When I take Bunny or Blueberry to school, it's always my wildest, most unruly kids who are drawn to the dogs, and they always seem to just relax and calm down. It's just some sort of magic that happens between them. I have a feeling that little boy might win that white dog over! :)

Children are definitely strange little creatures to us doggies! :)

I guess you all are fortunate to be in a country of animal-loving society. Over here in Malaysia, where animal cruelty still is prevalent, and where Muslims avoid dogs. As for children-dogs relationship, I have experienced children - always Muslim children - will taunt and provoke dogs. Regardless stray or domesticated. I walk my dogs and get taunted at by these children. It gets to the point I shout back at them, even if their parents are witnessing this.