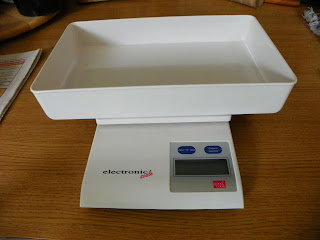 From the first day the puppies were born, we weighed them in this scale until they got too big for it, somewhere between 3-4 weeks old.  We weighed them every other day to make sure they were growing at a consistent rate and getting enough nourishment.  Silver had 10 active teats, though some were smaller than others and the puppies were constantly shifting around and fighting for the best spot. 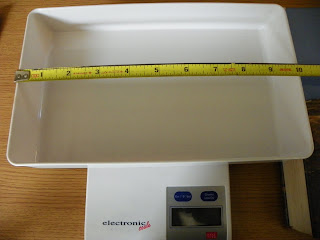 10 inches (25.4cm)
They all weighed close to one pound (.45kg) when they were born.  Chance was born the biggest at 1 3/4 lbs (.79kg) while Fiona and Blaze were the smallest at 12.75 oz (.36kg).  There was quite a battle between the three white boy puppies, until they were about a month old when Zappa joined in the race.
We never got any pictures while we weighed them.  They were so squirmy, it was difficult enough trying to get a solid reading, .  Probably the same reason we never thought to measure them. 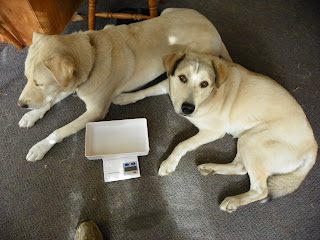 You don't really expect me to get back in there, do you?
I hardly ever use the scale and almost forgot I had it when I pulled it out to measure beans. It was one of those moments that just hits you, how tiny all those puppies used to be.  Doesn't even seem possible sometimes.  Even looking at pictures doesn't quite give an accurate measure, but there was something about the scale that brought everything back "to scale."  What happen to my babies??

Posted by 24 Paws of Love at September 12, 2011
Email ThisBlogThis!Share to TwitterShare to FacebookShare to Pinterest
Labels: puppies, scale, weight

They may not be babies any more but they are still just as cute! I have no idea how you do it...

Oh, they do grow quickly!

The really funny part is that the scale is probably not big enough to weigh their food nowadays!

But they're all as cute as ever.

Isn't it amazing how quickly they grow!
When I got Sherman and Leroy as pups I held them as much as I could because I knew one morning I would wake and they would be too big to hold!

Haha, I love that last picture, you can really see how small the scale is in comparison that way. :)

And of course they are still adorable.

I love it!!! When I go to our vet's office, I stare at the tiny scale that she used to weigh our dogs when they were little. It's unimaginable now!

Did their size at birth predict their adult size? Is Chance still the biggest?

KB- For the males out of the litter, yes Chance is the biggest. But for the females it is Fiona, who was the runt. In fact she weighs more than everyone here at 84 lbs and is in perfect shape!!

I would say in our litter that that their puppy weight closely predicted their adult size.

That is a TOTAL LIE!! They are still babies! They will always be babies... Now they are just ... extra big babies. lol