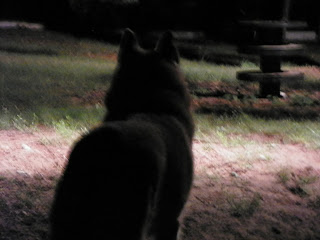 Until we meet again....Mr. Skunk!
We had our very first encounter with skunks this past summer.  The 24 Paws of Love have been rather fortunate considering there are ton of those stinky critters running around our neighborhood.  A skunk on the other side of the fence, must have had enough of Brut's interrogation and decided to shut him up.  I doubt it worked, but nonetheless, Brut got hit in the face with a small spray.  Somehow I had acquired a bottle "Skunk Off" that I had never used and decided to try it on him.  It worked great!  Brut only been coated in a fine mist, so I don't know how it would work on a more direct spray.  After it dried, you would never know Brut got skunked.

Since we had been so lucky not having any run ins with skunks,EVER, we were blessed not only with Brut's encounter, but two days later Zappa got blasted as he pulled my husband down a hill right up to a skunk in our neighbor's yard!  My husband was able to stay out of range, but Zappa got a pretty good soaking in the face and side of his body.  UGH!!  I used what I had left of the "Skunk Off," but barely had enough for his face.  So I rushed on line for a home remedy.  It was after 10pm, as skunks are nocturnal and no stores were open, so I just prayed I had enough of something at home that would take care of the God awful smell.  There are several variations online, here is the one I used (sorry I don't have a direct link):

Mix 1 quart hydrogen peroxide (or vinegar), I box of baking soda and 2 tablespoons of blue Dawn Dish Soap.  Sponge or spray on, leave on for 20 minutes, rinse and shampoo as usual. 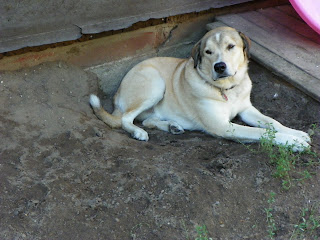 Yeah, I'd do it again...
It worked great!  I had also let Zappa in the house because it started raining.  Yes, not my brightest idea, but I didn't know what else to do with him.  So I sprayed the entire carpet with vinegar (to neutralize odor), steamed cleaned and voila, the smell was gone.

Thank goodness we haven't had any more encounters with those little stink bombs.  I think we met our quota this summer!  We still have a few months to go before the skunks go into hibernation for winter and until then we will keep our paws crossed.  :)

**Note** I have not be compensated nor I am endorsing "Skunk Off."  I am not receiving anything for mentioning this product.  The "Skunk Off" people don't even know I exist.  I just happen to have some of their product and used it in an emergency and wanted to share that it had worked.
Posted by 24 Paws of Love at September 15, 2011
Email ThisBlogThis!Share to TwitterShare to FacebookShare to Pinterest
Labels: dogs, skunk, smell

That is enough skunk action for the season, please! Glad you were able to find quick and easy solutions but it STILL doesn't sound like something you would want the fur kids to develop a "taste" for! BOL

Phew! Thank goodness we don't have any of those critters in SA. Good luck with getting the smell eradicated. :)
Sending lotsaluv to you all - every one of the 24paws (and their peeps!)
MAXMOM IN SA

Yikes! We smell them, and occasionally see them on the road, but thankfully no close encounters of the stinky kind. Poor pups!

We have had alot of skunks around lately too!!! We try to STAY AWAY!! Thank you for sharing that recipe though...never know when we might need it. Our big brother got sprayed and it took a BUNCH of tomato juice to bathe him as he weighed over a hundred pounds!! We are your newest readers!! Great blog you have here!! xoxo Chloe and LadyBug

One of Mom's biggest fears - a spraying by a skunk. We have that recipe in our bookmarked files, but we all hope it never has to be used.

Ha ha ha! Some dogs just seem to be a target for skunks, I think. We had some roommates when we were on vacation in Delaware who came from Boston. One of their dogs got skunked quite a few times at home, and sure enough, he got skunked on vacation, too! We've had that recipe memorized ever since, just in case!

Yay! I'm glad you found things that worked so well! We've never been skunked, but we've just been lucky!

I smell a skunk in our alley sometimes late at night. I'm scared we'll end up getting sprayed during a late night potty break. If it happens, I'll be back here for your recipe. :)

Oh my! That sounds like no fun at all. Our dogs got skunked a lot in the place where we lived on the west coast but haven't gotten skunked yet here.

I'm probably jinxing myself. Believe it or not, skunks have shown up on my wildlife cameras every night for the past week - and those are the first photos of them that i've ever captured. We could be in trouble.

Good luck staying away from the skunks.