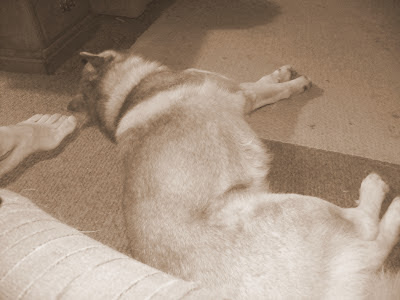 Brut is my heart dog, there have been many days in the past when I didn’t understand it, this is one of those unique times when I was quietly blown away.  We would like to give special thanks to (http://www.dogfencediy.com/) who have made this post possible.

I was sitting in my chair, up early for some reason and watching the heavy clouds pass by through the hazy dawn light,  when Brut walked into the room and without a glance came and laid at my feet.  A rare moment of him sitting ‘below’ me.  Humbled before me.  Not to mention his fear of my lazy boy chair because it rocks and the kick out leg rest freaks him out.  He was making a statement at that moment without any contact that he wanted to just be close to me. For the first few seconds I understood how he felt and then as time went on he moment astounded me as Brut had made a rather direct decision to be next me despite the evil chair that I was rendered speechless.  This powerful dog chose me over the couch and his favorite spot in the hallway.  He didn’t asked to be petted or want any other form of attention.  He wanted nothing but to be next to me.  Making the situation all the more powerful.  We sat still together and found ourselves communicating without words nor body language.  We were just BEING.  And I thought about how powerful that was and how humbled I was by it.  I may think that that the heavens stirred the first time I saw him when I chose him, but I still will never get over the fact that this majestic beast CHOSE me as well.

His directness and compassion couldn’t have come with more perfect timing.  And when dealing with a dog of such enormous will and strength there is no other word that fits than “humble” while he lay at my feet.  Like fall on the floor humble.  That’s when I began thinking how CHOSEN Brut is just for me.  There is an awesome respect that passes between us and this moment is unreal and yet it is alive and right here.  Any touch or words would break the concentration of being together, today, alone, just him and I at this moment.  It took my breath away as we absorb into each other and never move a muscle.  The AWESOME silence of just being.

There is something magical and mystical between us that I‘ll never be able to describe.  I have felt the terror in him and witnessed it first hand.  I have felt the force that radiates through Brut that resonates so deep inside of me and I have felt the depth of his love and affection that carries a intensity all it‘s own. but it is that stealth of nature when we are both still together that creates the most energy between us.  And energy that stirs and flares without an flinch.  We seem to find a way to immerse into each other and become one being.  Never have I experienced anything like it.  And I don’t know if I ever will again.


Posted by 24 Paws of Love at September 21, 2012
Email ThisBlogThis!Share to TwitterShare to FacebookShare to Pinterest

Ive been lucky enough to feel this connection with two special dogs. I miss it.

What an amazing powerful bond you have! Precious:)