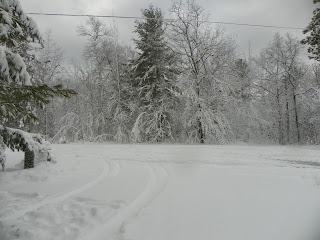 I don't know about anybody else in the Northern Hemisphere, but I'm hitting my breaking point with winter.  We're just starting to hit the mid-way point (fingers crossed) and I've really been struggling with the winter blahs.  It sucks being inside too long as well as outside.  I don't know what happened in the last few years as winter used to be my favorite season and it was summer that I dreaded, now it's the exact opposite.

So were doing the best we can to survive.  Dog sledding and walks help, but it can be so limiting.  So to try and pass the time, I've been working with Fiona and Zappa on some behavior training.  Especially "Leave It."  Seeing as the last time we worked on it was when they were like five months old and Daddy has "trained" Fiona to steal his food anytime he leaves the couch, I figured it was a good place to start. 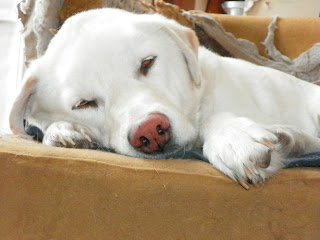 So every night after dinner when it is just the two of them in the living room we practice.  I place a treat in front of them, tell them "leave it" and then when they give me eye contact they get a different treat than the one I placed down.  Zappa is so adorable to watch.  He works so hard not to look at the treat and get his eyes up to mine that he bobbles his head up and down as if physically trying to lift his eye up to meet my gaze.  It is hilarious.

They are both catching on quickly, but I am still working on being able to walk away from treat while in front of them.  That one is a little too tempting.  So I scaled it back to just standing up and sitting back down again.  It's hard to catch them sometimes before they eat the treat, the little buggers are quick! 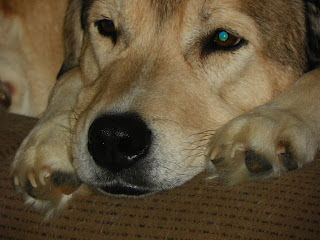 But I'm already seeing results, especially with Fiona and Daddy's snack time.  Which is quite a bonus for just a little bit of work.  And Zappa who likes to try and steal my juice cups.  I've been saying it when I leave the room whether they know there is anything or not and if they are in the same spots, I reward them.

I never had enough time to really work with Zappa and Fiona when Chance and Blaze were returned.  Between Brut, Chance and Blaze the three took up almost all my time.  So it is always a treat and sweet reward for me to be able to really work with them as we continue on this journey of getting to know each other a little better.   And the more the household settles down and gets in routine the more Zappa and Fiona  are enjoying the extra and well deserved attention they are getting.

So how do you and your dog get through the winter blahs?

Our Winter has not been too bad so we are lucky. We are just sick of all the rain. Peeps gave up on the leave it trick as I drool too much. Have a fabulous Friday.
Best wishes Molly

Woof! Woof1 We missed 2012 winter so glad to be back home and we are currently enjoying the cold and of course snow. Have a FUN Friday. Lots of Golden Woofs, Sugar

I am not a fan of winter, esp. now that I live where it is cold and snowy. So I have the winter blahs too. I wish I had a doggie to work on training with, I think that sounds like fun!! If I tried to train my cats to "leave it" I am positive that a million hours would never be enough, lol.

Winter is a respite for us from the harsh Phoenix summer. It means longers walks and more outside time. We definitely have the opposite problem here. But our pups definitely crave that in between season where they can lay in the sun all day without overheating.

I had the winter blahs a few weeks ago. Then all the snow melted and it was warm out and I missed the snow!

We haven't had much winter here to get the blahs over, but all the grey really gets to me. When we do "leave it" we sometimes pick the treat up and give it to them after they've worked successfully, because at the nursing home (and sometimes other places) I don't want them to take food from anyone else but me. Sometimes the nursing home residents have medicine in their ice cream that they don't know about! lol

We've been doing nosework to beat the winter blahs with the dogs, and I know they are really enjoying it. My husband will come in the bathroom and hide treats while I'm putting on make up to go out, and then tell Morgan to come in and "find it." Hours and days later, she returns to the site of the hidden treats hoping to find something she missed. I love it because it really makes her use her brain, which helps her stay out of trouble later!