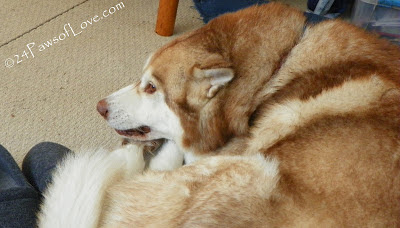 Brut is aggressive.  It as simple as that.  And while he we have less and less incidences with him lashing out on the other dogs, he will always be aggressive.  It is his nature.

As painful and scary this demeanor is, I also love it about him.  When he uses his dominance in a way that is productive, it is an awesome sight, that only takes the power of his death glare to make the room his own.

I love that fight.  I love that spirit in him.  And I wouldn't break him of it if I was paid to.

It is what makes Brut, Brut.

In my life I've been pressed to the ultimate limits of my will being broken and it is that last scream of innocence that has kept me alive another day.  And I could never force that onto Brut to contend to my will or anyone elses.  I have live too long that way, I could never put those screws to his head.

In fact it is his aggression that I understand the most.  The feeling of being boxed in corners you can never get out of, but you fight because you have to.  Somehow, someway you must fight.  That is what I see in Brut.  That's what I see in myself.  And that is what has caused me to think way outside of the box, especially with Brut.  Brut's uniqueness is just that.  He forced me to make that tiny crack and peek outside the box.  Then we worked constantly on breaking it down, even the ones I built back up because it was scary and awkward, we broke those down too.  And we are still cracking and crashing through walls due to our very nature of fighting for what is right. 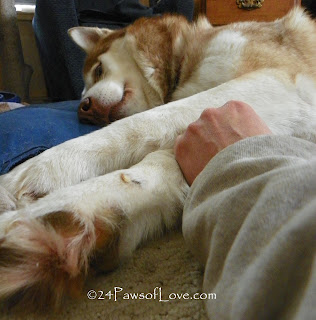 When I harness his energy, I harness mine as well.

They wanted to break our wills, but they couldn't.

This time around I've got a partner and so does Brut.
Posted by 24 Paws of Love at May 20, 2013
Email ThisBlogThis!Share to TwitterShare to FacebookShare to Pinterest
Labels: aggressive, breaking wills, fights, spirit

He is so lucky to have you as I'm sure you are to have him!

You cannot help but respect the strength and resilience that boils in the core of each of you. You know and recognize the incredible power of never ever giving up. Together, you are capable of the most wonderful things.