I'm having a hard time trying to shake this whole thing with Brut and our vet.  Even looking back and analyzing every second, there was a one second window just before he went for her face if there was a moment to make a correction, that was the time.  And it wasn't enough time to do anything.  Other than not have gone through with the heartworm test and shot in the driveway of our home, Brut showed no signs of aggression, frustration, stress, or any crazies.  But my guard was also down.  Way down.  The rest of the dogs had went so well, I got caught up in the hope that Brut would too, instead of taking into account, it was Brut.  And normally I'm right in tune with him and can read him so well.  And he fooled both of us.

And I'm so cautious, extra cautious in situations that involve Brut.  Always have been.

Everyone at the vet clinic was saying, "It happened.  Don't worry about it.  Could have been a whole lot worse.( The vet had a mark on her nose and shoulder.)  Shit happens.  You guys are good."

And I'm just having a hard time letting go and believing that.

Brut has been sticking right close to me as if in remorse and trying to help me come out of my shock and fear of what happen.

It's still so hard to know everything is OK. 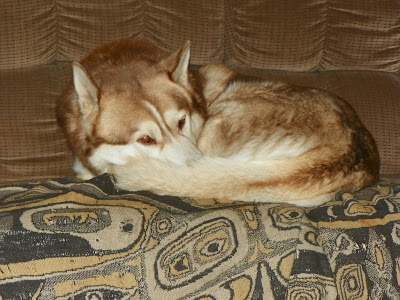 Posted by 24 Paws of Love at May 11, 2013
Email ThisBlogThis!Share to TwitterShare to FacebookShare to Pinterest

Try not to worry. Stuff happens and I am sure the vets have had worse. Lucky nothing really bad happened. We are sure Brut is sorry. Have a serene Sunday.
Best wishes Molly

You shouldn't feel guilty over it. In the end, despite how much we train and prepare, these are still pups with their own thoughts and actions. If you had tensed up over Brut, he might have reacted more aggressively. By thinking he would be okay, you were most likely relaxed and the incident was not as severe. The vet's do understand. Having horses and dogs, we've seen many incidents like this. We had one horse pull a heavy timber hitching post out of the ground and knock our horse shoer unconscious, breaking his nose in the process. This horse had never been a problem before.

In Brut's mind, he is most likely already past the incident. Try to look forward.

Sending hugs - we've been there too. :D

Try not to dwell on it. No serious injuries and lesson learned. Take it for that. Take care.

Brut senses your distress and that is more damaging than the Event that is over. Forgive yourself for being too optimistic but reserve the hope that one day with the great progress you are making Brut may be ready for a home visit. Until then, lesson learned...give your boy a hug.

I had to go back and do a little 'catching up'. Sorry I've been amongst the missing...

I know how you must feel. Even Sage has her moments at the vet. We know taking her temp. rectally is totally off-limits.