My husband, Mark and I have very different views how we interact with our pets.  Mark never had pets as a kid, so he is like one big kid with them.  He thinks everything they do is comical and hilarious, even the bad things like sticking their noses near his plate.  He is horrible at discipline, because he is always laughing.  He can not be serious around them.  I swear all I do is correct everything he undoes while he is home.  lol  All the dogs know they can get away with anything when Daddy is home.

I on the other hand grew up with pets and and a household where discipline was a must.  No dogs on the couch, in the kitchen, on the bed and don't even think of looking at my plate.  Growing up with such strict rules in regards to the pets carried over into my adulthood.  I learned the earlier you start to discipline a puppy the better.  Then we got Silver and she started to help me break the rules. 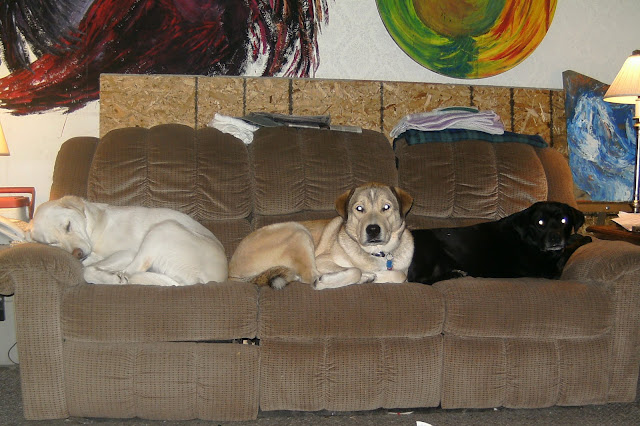 Oh, did you want to sit here?


As soon as she was big enough to, she was on the couch.  I loved that.  Nothing like cuddling with my little girl watching TV, but she still wasn't allowed on the bed.  Then when the puppies came along, we had one little puppy named Angel who would sneak out of the whelping box (she was the only one who figured it out) and get up on the bed and cuddle with me.  It was like heaven.  Her warm puppy kisses waking me up.  I'd always wanted to sleep with my animals when I was kid, but wasn't allowed. 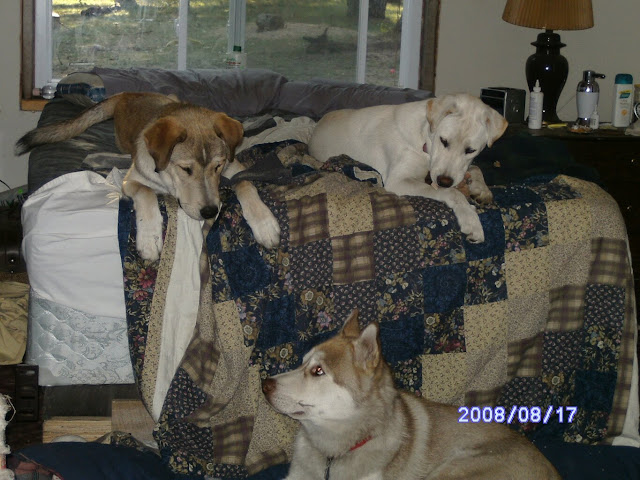 Zappa and Fiona look down as Zappa gets "the look" from Brut.
"Kids rule and Dad drools!"

My husband had overnight work and didn't want me sleeping alone.  Since Brut and Silver weren't allowed on the bed and couldn't get them up there when we tried, we let Zappa and Fiona on the bed.  It was great.  They were only about 3 months old and they snuggle tight up against me.  Although I don't know how great a sleep I got as I became locked in position all night. There were nights it became terribly difficult to move as they grew, but eventually we learned to shift together.

I still don't let any of the animals near my plate, but I might share a bite after, another thing that was forbidden growing up.  Mark always saves enough for everyone, every time.  He started a traditional when we just had Alex and Silver of a bone or chew treat every night.  The tradition continues as he is always finding goodies for all of them.  We have a stash in the kitchen, basement and garage.  They all know what it means when the wolf  "cookie jar" howls. It is snack time. 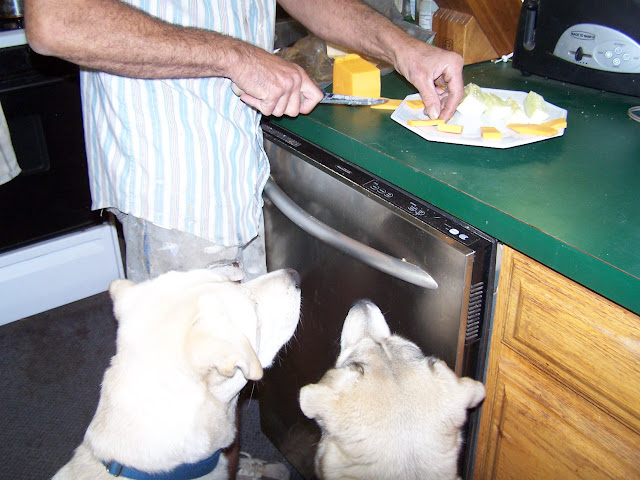 So while I'm learning to loosen up my rules with the animals, Mark is trying to be more serious with his discipline.  We are quite the ying and yang with the pets and with most things really.  I'm more the dog's leader while Mark brings the childlike wonder and fun into the mix, giving us a balance that seems to work.

Any "rules" you've broken from childhood or getting another pet?

Posted by 24 Paws of Love at August 06, 2010
Email ThisBlogThis!Share to TwitterShare to FacebookShare to Pinterest
Labels: dogs, pets, puppies, rules

I've had to reinstate the 'no animals in the bed' rule because otherwise the cats and dogs keep me up all night.

When we got our first two dogs - Laura and Mika, they were always outside and never allowed indoors.

Then we got Hana, and she unexpectedly gave birth to baby Eva. Of course we can't have a mother living outside, so we put her in our kitchen.
After Hana passed away, Eva grew bigger and couldn't fit in her small playpen in the kitchen so we made a storeroom Eva's room. From then, although Eva is not allowed to roam the house because of her weak legs on tiles (a very bad idea), we carry her sometimes into the study room, etc. LOL Lucky puppy girl right?

Stuck on the "howlin cookie jar". Wantin one of those real bad!

Okay, yes, when I came home with my parents they were set on never letting another dog in bed again. It took me a few weeks of making horrible "I'm dyin here" kinds of sounds ;) but, well, suffice it to say. I sleep in bed with them now :)

When I was a kid, my mom tried to enforce the "no pets in the bed" rule. However... I used to sneak my pup onto the bed, so then it became a habit. Now we don't let Bella on the bed (though I've broken that rule on occasion - luckily she likes her bed and only stays for a little while). I've always let pets on the couch... I don't want to give up the snuggles!

Same story with my dad! I'm his first pet, so he thinks every think I do is funny. Even when I jump on him and walk all over him on the couch. Mom doesn't let me do those kinds of things, she's also the mean one that give me my baths, medicine when I need it, brushes my teeth and all those unfun things. Dads are definitely where it's at.
-Corbin

When we were interviewing for our rescue dog Kelly, the rescue lady kept asking "Will she sleep on the bed with your son?" For some reason that was very important to her. I didn't want to tell her that the dog wouldn't be allowed on the furniture. Now Kelly doesn't sleep on the bed with our son....she sleeps on our bed with my husband and I!

There's really no place that's off-limits to us if we can get to it (except the garbage). Mom and Dad are bad at discipline around the house, whatever one of 'em won't let us do, the other one will :) Mom wasn't allowed to have her dog in the house AT ALL when she was a kid. She didn't think that was right!
The Road Dogs

Hey in my house there are no rules! Although my momma tends to disagree BOL!