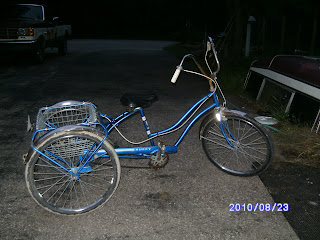 In the last week I have been able to have 2 different sets of dogs pull me on my three-wheel bike.  Believe me it's sturdier than a two wheeler with a couple of untrained dogs.

My first jaunt out was with Chance and Blaze.  They were both excellant about getting ready and when they took off, I hung on for dear life.  We went at top notch speed for about 3/4 of a mile until they knocked it down a couple of notches and I could catch my breath.  Two dogs is the most I've done, I can't imagine mushers that run with teams of 4 or more.  I think I'd have a heart attack.

Since we are traveling down the road through the neighborhood, at any given time there can be cars, people, or other dogs and with them running at top speed and worn out brakes, that means I must control things with all my might.

We were lucky the coast was clear tonight.  One struggle of having the dogs pull is having to turn around to go back home.  There are no blocks to go around.  Stopping to turn around breaks all the momentum and drive and usually means a struggle to get going again.  Blaze has always giving me a hard time after we turn around, but this time she started running again and Chance followed, which was rather interesting.  Since usually I practically have to drag them home after we turn around.  I would love to take them to the park one day and see if they could/would run the trails out there that are in a loop.  I'd like to see how they would go when given the chance to keep moving forward.  I think that would be awesome.

I've found in watching Blaze and Chance run togehter, that even though Blaze has the natural pulling talent and her body seems designed for it, Chance would make a better lead dog than Blaze.  Chance is a worker.  He takes his job seriously and is always ready to follow instruction.  Blaze on the other hand is running for the freedom of it.  She is great at setting the pace, but is too "wild".  She is constantly on the hunt and understands all too well her freedom being on the other end.  I had always thought for the longest time that Blaze would be the perfect lead dog, but not at this point in time.  She still needs to be harnessed and reined in before she could ever take the driver's seat and she is not ready for that.  Whereas Chance has a solid head, knows he has a task to complete and is ready to execute.  Between the two of them Blaze is the instigator.  She starts the problems and Chance joins in.  She smart enough to manipulate him into doing what she wants.  She also tries these things with me, but I'm usually on to her and don't let her get away with it.

Isn't it interesting the different dynamics between dogs and their personalities.  How they learn from each other and their roles together.  I think it is fascinating how dogs from the same litter all are completely unique and alike and how their make up may be as near or different as the next.  All this time I thought Blaze was a perfect match to be lead dog when it looks as though Chance "the follower" would be better suited at the role than Blaze.  I never would have thought that, if I hadn't witness what I did with taking them out for a bike pull last week.  Simply amazing.

p.s. Sorry no pictures of dogs in gear or pulling.  I was a one woman show that night and timing is everything.
Posted by 24 Paws of Love at August 26, 2010
Email ThisBlogThis!Share to TwitterShare to FacebookShare to Pinterest
Labels: bike, Blaze, Chance, dogs, pull

Thats awesome!! How cool that is to be able to exercise your dogs like that! I love reading how their personalities differ even though they came from the same litter!
Im always a one woman show so I feel your pain on the lack of photos!!

Wow! I wish I had one of those bikes! I`d make our dogs pull us everywhere!!

What fun! Now that's the way to ride a bike!

Given Mom high paws for bein so brave!
Roo

Amazing! You are brave!
I have my own sport something like that...I'll show you some day if I can get dad to take a few pictures of mom and I.

Pretty cool. Our Dad keeps promissing us we will go Urban Mushing but so far no go and now it is too hot. Hopefully Fall and Winter.

Cool! I wish I could do that!

I really wish they were highly trained, Feral Female because I'd have them take everywhere!!

(takes a bow), yes, having the Chance and Blaze duo pulling me definetly takes courage! It ain't no little jaunt!!