Here is my reason:  When Fiona and Zappa were about four or five months old, I was working on getting them used to the bathtub and water.  Not long after Blaze came back and with everything she had suffered, everything fell apart for quite sometime and then shortly later Chance came back...and well a bath just wasn't a top priority. 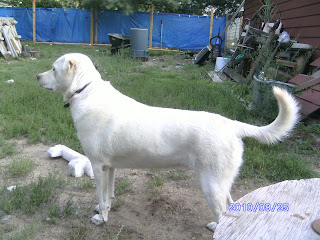 Fiona was first and she did great.  I want to thank Bella and I Still Want More Puppies for their photo that gave me the idea of using a bathwater and a cup instead of a sprayer because Fiona would have been scared to death of a sprayer.  She freaks out about everything anything weird on her skin, taking medicine, being brushed, you name it she don't like it.  Fiona will also run and hide for the rest of day if I say, clean her ears and after her bath she stayed right in contact with me.  It was great! 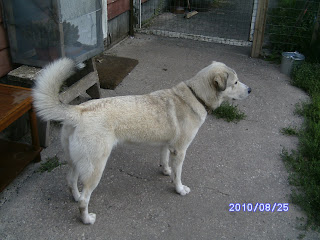 The kaleidoscope of Blaze's colors

Blaze used to get baths all the time from her previous owner and because of her trauma I never dared to push it.  She did great.  She kept looking for a way out, but I kept one arm around her and I have a hook that I tied her leash to.

Fiona and Blaze even took treats from me and most importantly the ones I had on the edge of the tub while I was bathing them!  That was when I knew they might not be entirely happy but they were both just fine.  If either of them doesn't like what I'm doing to them, they will not accept a treat to justify it.  So this was a big bonus.

And there's nothing better than being able to jump out afterwards and run around like a manic!

I don't usually go this long without giving a bath.  I normally give them a bath about twice a year, so not to dry out the oil in their skin, once in the spring and fall.  Unless they decide roll and stink in something.  That's how  Zappa got his first bath about a month ago.  Which he also did fantastic with.

Amazing how a little time, maturity and stability can make a difference in something simple as a bath.
Posted by 24 Paws of Love at August 29, 2010
Email ThisBlogThis!Share to TwitterShare to FacebookShare to Pinterest
Labels: bath, Blaze, Fiona

Wonderful news! First of course that they got a bath after how many years?!!!!! LOL

And second that they didn't seem to mind as much as you feared.

I only get a bath every three months. My raw diet makes it so I don't get the "doggy" smell which I don't mind but I guess humans do :)

Thanks Roo! I didn't know you liked baths so much!! I don't care about the doggy smell, I just wanted to get three years of dirt off!!

Yay!! I'm so glad that bathtime went well!!! They are beautiful!!! Every dog I've ever meant in my life has not been a fan of baths hehe. If I said the word or if Timber saw a towel she would try to hide. She would come eventually, especially fast if I used some cheese to coax her, she knew it was for her own good though because she always felt so much better afterward and would run around like crazy and act like a little puppy again. I would always have a towel ready for her on the floor and she always knew to get onto her towel and sit there for a bit to dry off, it was so adorable!!! I hope you're having a great Sunday!!! ~Hugs~ Lauren and the fuzzies

We don't do a lot of baths around here, either, unless it's necessary for some reason. The Greyhounds don't need one more than twice a year and I've heard it's not really good for Morgan's coat, either, so we leave it mostly alone unless they stink or get something on them. The dogs are fine with that arrangement!

We don't like baths either, but Indiana sure does love the pool!

Thanks for visiting our bloggie! We love new furiends!

Glad the bath worked out. Kelly does okay in the bath as long as there isn't running water. We fill up the tub or a kiddie pool outside and then use cups to dump water over her instead of the faucet or a hose.

Oh, I wish I only had to get a bath twice a year. I need to talk to Mom about that. She insists on doing it every couple of weeks! Claims I get too stinky. Hrmph!

They look so GREAT!
We hardly ever have baths either...its probably because we're always swimming in the ocean and the clean rivers here on Vancouver Island. We don't have a bathtub in our house but we did need to have a shower a couple weeks ago when we ran away from home and snacked on a seal carcass.
We want to let you know that we've moved to www.theblablabs.com and we're looking forward to welcoming you there. :) *tail wag*

Glad the baths went good! They look great!
We give the boys a bath in the garage with the hose, unfortunatley our bath tub is not big enough:)

Bath time is a nightmare around here- Mickey does well but Kayloo acts like we're trying to chop her paws off. Glad you're all set for another 3 years! ;)

There must be something in the air - it was nails and baths day here today as well. Frown city!

Don't feel bad, Buck hates anything to do with water & I gave up on bathing him a few years ago. I used to get the bathroom all ready, barricade any entrances he could escape through & then it took two of us to finally get him in there. Once he was in there he was fine but the getting him there was a workout. I'm just too old to go through that anymore.

I am so glad that it went better than you expected and the zoomies were able to happen afterwards :) Fred requires a bath every 2 weeks with sulfur shampoo to strip him of his hound oils.. he hates baths. thank goodness I have a spare bathroom and I just bath the duo in there but bathing both back to back is exahausting!!!