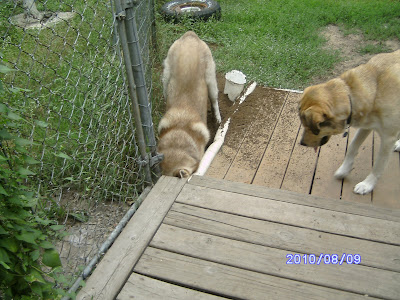 In my observation, Brut's aggression is an exaggerated alpha dog correction.  While watching the dogs try to chase a chipmunk under the deck, Brut had dug a huge hole on one side in an attempt to get underneath.  The chipmunk would chirp from under the deck and both Brut and Zappa would get more and more excited.  Brut continued to furiously dig, while Zappa ran back and forth.  The only opening was the tunnel Brut was digging and Zappa could hardly resist himself.  Zappa continued to press little by little into Brut's "territory."  Testing his dad to see how far he could go.  After I went inside to take a phone call, I heard the explosion of a fight.  Usually they last for a second or two and it is over, but this time anxiety and excitement had pushed them both over.  I had to pyhsically separate them.  Corrections are useless at this point. It becomes a matter of getting them separated and giving them time to cool down.

It was easy to see that Zappa had crossed a very delicate line and is known for pushing the limits.  Brut wasn't about to share in the glory of being so close to the chipmunk and was teaching Zappa a lesson.  I in turn had to fill in and block the hole because I hadn't realized Brut had dug so far that the fence post had broke loose.

These type of fight happen are quite rare, but it does happen.  It sounded and looked much worse than what it was. They both walked away without a nick or scratch on them.  After blocking the hole I brought them both out and it was if nothing had happened.  The high intensity of digging after this chipmunk brought on Brut's deep rooted issues of possession and territory.  While Zappa in the excitement and belief that he can always press his dad limits set off the trigger that erupted into the need to correct Zappa.

If anything it was my fault for letting to go for so long.  They had been after this chipmunk for a couple of days and I wasn't paying attention to how their energy had escalated.  As I watched Zappa test his dad, it was apparent that it is was only a matter of time that something was going to happen as neither were about to give up.  An episode like this is quite rare, so I missed the red flags that were starting to go off.  When all was said and done everything was fine and they took off after the squirrels.  At least the squirrels stay in the trees and don't give the dogs a reason to dig.
Posted by 24 Paws of Love at August 20, 2010
Email ThisBlogThis!Share to TwitterShare to FacebookShare to Pinterest
Labels: aggression, anxiety, Brut, chipmunk, correction, excitement, squirrels, Zappa

That's what Kim doesn down rabbit holes - you're afraid she's doing to get stuck!

I think you sure did the right thing about not discplining them at that time. They would not have understood at all. All they could think about was that chipmunk.
Hope you have a fantastic day.

My dog loves to chase chipmunks too.
I'm glad both your dogs were ok.
I also wanted to tell you that over at my blog, I tagged you for the versatile blogger award. Thanks for such a wonderful blog!

Glad they both came out with a scratch. I had one incident like that but it was a racoon. Fred and Haylie chased it up a tree and it was about 6 feet above them grunting at them like crazy and Haylie overstepped her boundry and Fred was in such a frenzy he went after Haylie.. I had to rip them apart, no one had a scratch but its always scary and when its at that point your right all you can do it rip them apart and let them cool off and bring them back together!
I feel ya girl!

My mom says that this is yet another very interesting and informative post. Tank yous for teaching hers sumptin' again.

Ai-yi-yi! I KNOW the sound of those fights and I'm glad the barks really ARE usually worse than the bites. But it makes my blood run cold every time. Bodie - our five-month-old Aussie/whatever mix - is big and challenging to Minky, our Aussie/Border Collie - who is lean and slight for her agility work. It scares me when they tangle but I let it go so Minky can establish firm dominance over Bodie, who will be able to kick her rearend easily in not very many more months.

Minky has got to get the fix in NOW. I learn from you and appreciate your dog insights!!!!

I love how you understand the dog dynamics in this whole incident. Its great when humans learn to read "dog" and treat them as such. :) Thanks for sharing!

Great post. It is awesome how some human understand dog.

Learning the red flag signs to watch for and remembering to be aware of them in these times is key to dissipating aggressive behavior before it happens.

I tend to really focus on always showing dogs what to do, rather than correcting for something that is usually after the fact ... and the dogs may or may not connect what moment they are being corrected.

Great attitude you have about the "incident"!

Chipmunks and Squirrels for everyone here! Silly dogs fighting over a chipmunk. Every so often we have a fight that breaks out, not fun but it is expected living with basically a pack of dogs. It usually last about 30 seconds. Glad no one got hurt. Have a Wonderful weekend.

Just stumbled upon your blog today and love it! Your dogs are so beautiful. Love this post. New follower and just wanted to say hi = ) Happy Sunday!