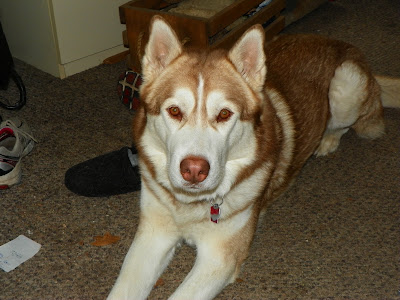 The art of BRUT ZEN

I never thought I could learn anything but fear and hate from Brut's aggressiveness with dogs, but somehow I have.  This anxious, neurotic Mommy has had to learn to be calm.  CALM.  What the hell is that??  You mean I have to be calm in order to handle dog fights that are scary and make me want to beat Brut over the head to make him stop because my fear just fuels his fire?  You've got to kidding me.  But that is just what I'm talking about.  Blaze has started her heat, three males in house, all ready to claim her, hormones are kicking, tension are rising and this meek fearful Mom is suppose to remain relaxed and handle an outbreak without any fear?

I will NEVER get accustomed to dog fights.  How people can get off on them is beyond my scope.  It is even worse with dogs you love and see them fight, but it happens.  They are rare now, but with Blaze's cycle starting, the chances are a little greater.  It is a terrifying experience every time and you never really seem prepared for it even when you know it is about to happen but you're not quick enough to stop it.  The fear that electrifies in your gut instantly makes you want to react out of that fear.  In that moment nothing seems rational as the teeth fly.

None of the dogs have had more than a bloody scratch on them from a fight.  From my observation they never mean to kill, just to fight.  They never go for the throat, just the face.  Like a street fight, only with teeth.  Brut is usually at the center with another dog, but all of the dogs have had a riff or two between them at some point.

We do as much preventive maintenance as possible, stopping aggression and fights before they start.  Thank goodness at this time that Chance is separated from Brut and Zappa, who have a long history of challenging and pushing each others buttons that that don't need a third party involved.

So now during what I consider a very fearful time, I must remain as calm, cool and collective as possible. Not just during a fight, but ALL day.  I need an air of confidence and stability that is not in my genetic code.  Leave it to Brut to teach me another life lesson.

Today was a good example.  Brut was noticeably calm today.  So was I.  What a difference it made under such extreme conditions.  He wasn't pacing or anxious.  Which made me aware that Zappa had calmed a bit also and wasn't egging his father on.  (Zappa is pretty protective of Blaze as she was his "first love" by accident, during Blaze's first heat, even though he is fixed.)  We have about three weeks of this and it is only going to get worse.  Brut is the only male who isn't fixed and eventually his hormones will override everything and well, if you've never witnessed a male when a female is in heat, it ain't pretty.  But for now we are only on week one, we still have time to prepare.

These special times will be putting my skills to the test.  The test of staying calm in such a delicate situation.  Of finding the strength regardless of what happens to handle and control the circumstances with every ounce of confidence I have in me, because it isn't going to be easy.  Just the added anxiety that will surround me will make me want to crawl out of my skin, yet for every one's sake I will have to centered myself and pray I have what it takes to make it through this time period.  And it will take all of that, one day at a time.

The Best of Luck! When my dogs go at it, besides screaming and yelling, I almost get sick to my stomach. Obviously I am the Alpha.*l*

Good luck with that! I've heard about dogs going crazy when there's a female in heat around...

The only fight dangers around here are street dogs defending their territory. Some get very aggressive and try to bite. Good thing Aschiuta is light and I can pick her up, or else she'd foolishly go say hi. It seems they cool off if I bark some "go away" command at them or try to chase them off.

I guess it's good to stay calm and impose some authority.

Do you breed? I've never had a dog that wasn't "fixed", so I can't imagine going through this!

Sounds like "Fight Club" with dogs. Just think of him as Brad Pitt....or maybe he's Ed Norton...hmmm...let me think about that one :)
Good luck!

Staying calm in the middle of a dog fight (or when you sense one about to break out) is really hard to do, but it certainly does make a difference. Animals are very adept at picking up our moods. You might want to read some of Linda Cole's articles on the RPO blog about dog fights. Here's one: http://canidaepetfood.blogspot.com/2010/11/dog-behavior-understanding-dog-fights.html

My first two dogs, Agatha and Christie used to fight periodically. And I know my anxiety fueled much of the problems. I wish I could go back and relive my time with them. I'd do so much better now.

For a while, things calmed down as they grew older. But when Christie started having seizures near the end of her life, her strange behavior when coming out of a seizure would often trigger a fight.

I'll never forget weeping on my kitchen floor with blood all over my hands trying to find which dog was injured and where. It's a terrible thing to go through.

I think it's great that you're finding Brut's lessons and making them your own. I'll be thinking of you over the next couple of weeks.

Pamela-we only had the one litter of pups with Brut and Silver. We want to keep our options open with Blaze because she is the only female out of the litter than can carry the line. (we would keep all of the puppies IF we ever did breed her.) We have no plans of breeding Brut, but neither of us want to get him fixed.