Thoughts From the Other Side 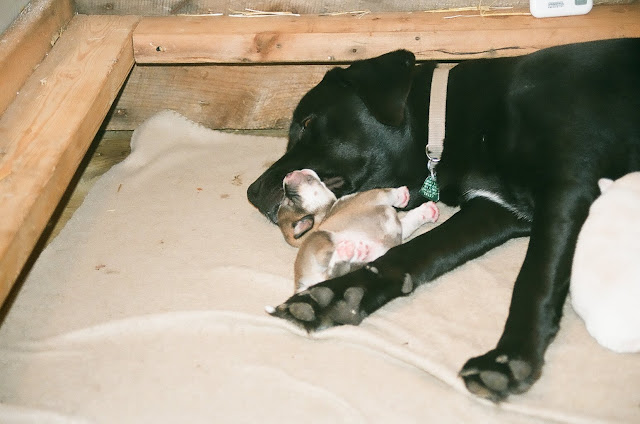 Mommy Silver and Zappa at one week old.

When we got Silver we planned on her having puppies.  For those first four years before she got pregnant, Silver and I were instinctively in tune with each other.  I could just think her name and she would be at my side or at the door ready to come in.  There was an intense bonding when she was pregnant and became a mother.  No more different than any mother would be if their own daughter was pregnant.  When we had her spayed after having the puppies, it was like the bottom fell out.  She was five years old and I felt like I'd "lost" her.  Besides the physical problems she was having due to lack of hormones, there was an emptiness in her that made it difficult to reconnect with her.  It was if she lost part of her soul when that surgery was done and it took away the higher consciousness we had together.

Silver has always been a moody dog, but the sparkle never left her eyes, until she made that trip to the vet.  It was heartbreaking watching this beautiful dog's spirit dying before our eyes.  I had no idea the traumatic impact this would have on her.  Silver was born to be a mother.  Everything in her being was made for it and when we took that away from her, it was more than just an organ being removed, it was the center of her being.

It wasn't until almost a year after the surgery that she began to bounce back little by little.  Silver had lost the extra weight she had gained and her fur loss had diminished.  Her mothering sensitivity and nurturing care slowly began to show itself again.  She began to open to me and wanted to take care of me again, but that strong intuition had lost its previous intensity we had together before she was spayed.  She still knew before I did when I needed her, but now these were only moments of time.  I miss the electricity that was once there between us and I find myself a little saddened by once was.

It makes you wonder, when we spay and neuter what we may be taking away from our animals and our relationship with them.  Maybe this is the reason Brut and I are so utterly in tune with each other and how we understand each others vibes.  If you really look at it, these procedures are not a natural act of nature.  There is more to these organs than just reproduction, it is a creation of who we are.  If you look at it without the basic need to procreate, it is the most natural state of being for any creature.  Hormones are not the evil of life, they are the very being of creation.  Neither of us would be here or our animals without them.

There is such a hard argument to stop unwanted pregnancies, which I agree with, but have you ever stop to think what else you may be taking away?

**DISCLAIMER**-This post is neither for or against neutering and spaying, it is only my observation and personal opinion.

Join us for the Saturday Blog Hop hosted by Life with Dogs, The Two Cavaliers, and Confession of the Plume.

You know, I've also thought about this from the same point of view. Imagine if someone spayed/neutered us too, because the Earth is overpopulated or we can't afford to have children. We would feel like some of our personality and dignity has been taken away. I'd be inclined to think dogs suffer in a similar way.

I feel a bit upset that we have to do that to Aschiuta, but I guess we have to. If we can afford getting another dog, there are plenty out there on the streets.

I've wondered about this as well. It's something that makes me morally squeamish... and I completely understand your sadness about what once was. :( It's a "toughie" that's for sure, since the benefits of spaying/neutering are high, often even for the animals themselves.

Aww such a lovely photo. Just hopping on by via SPBH. If you have some spare time please come and say hello to me too.
Helen x
http://acraftykindoftruffle.blogspot.com

That's a hard one and something that many would struggle over. Your post was very thoughtful and interesting.

As a person who has worked in rescue for a long time, I still think spaying and neutering is very important. It's not like people are begging to find a cat or dog in this country. They are everywhere and many die because there are no homes for them. The other aspect is that unspayed and unneutered dogs are at a much greater risk for a lot of cancers than their altered counter parts. I just read a heartbreaking blog about a Greyhound who wasn't spayed until she was eleven years old and now several years later is having to undergo surgery and a lot of discomfort from mammary tumors -- a big risk that comes from not being spayed.

I can understand your point, but I've never had one of my dogs suffer any mental distress that I could see over being spayed or neutered. Bunny would climb inside my skin and breathe with me if she could -- we're that connected. I don't think my relationship with her would be any different if she hadn't been spayed. I'm not bashing you, just offering my own insight.

What a heartfelt and well written post. I couldn't agree more with your observations of what was lost. Sadly our sinful world doe snot accommodate much idealism, but it is nice to think about it. I hope somehow you can continue to grow closer to Silver. Thanks for sharing.

That's so interesting, and so true. It makes me glad that Layla isn't spayed yet, because she's so perfect exactly the way she is. Altering anything chemically or hormonally (by spaying her) would change who she is mentally. You made a really good point!

There is something for you on my blog.

well we didnt know what to do when Sayuri had her puppies but after she had them she was so weak that we were scared we were going to loose her that we didn´t want to go through it again. So when Kira and Sakura were old enough we had them spayed. its a difficult decision but we love our dogs so we really want the best for them,,sometimes we have to embraced tough decision.......u will get her back... trust me

Interesting..I really hadn't given much thought to this. Unwanted pregnancies, "throwaway dogs" and shelter overpopulation are such human issues, not canine issues. Sad that the individual dog's value is rarely promoted...

ForPetsSake makes an interesting point. Spaying and neutering are choices made to make things easier for humans. Balancing the needs/enjoyments/ pleasure of dogs with making it easy for humans to live with them is at the core of most of the controversies concerning pets.

Thanks for putting yourself out there with your heartfelt thoughts.