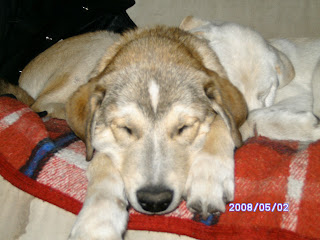 At four months old Zappa was always finding things to pick up and run off with.  One time I went to use the bathroom and sitting there I realized I didn't have any toilet paper.  Zappa had been known to take off with it before.

I called his name and he came bounding in with a big roll of toilet paper in his mouth. It was the cutest thing ever.  I thanked him and he went on his puppy way.  When I relayed the story to a friend, she replied with, "Good thing he brought it back!"  Which made the whole incident even cuter and funnier because it had never occurred to me that he might not bring it back.
Posted by 24 Paws of Love at January 17, 2011
Email ThisBlogThis!Share to TwitterShare to FacebookShare to Pinterest
Labels: puppies, TP, Zappa

I was thinking the same thing as your friend - that could've been quite a predicament if he was the "come and get what I have" kind of kiddo!

Now *there* is a useful trick - well, not the running off bit, but the bringing TP when called part! Very cute. :)

Do you think you could teach Zappa to retrieve a fresh roll when someone else in your house leaves you stranded? Every dog needs a job.

Thanks for the nice comment on my story. I was kind of wondering if anyone would ever be interested in reading it.

Zappa was a good boy... Aschiuta stole napkins and maybe we'd see the shreds back.

Hee hee! I can just envision the scene here! Morgan would have made us chase her for it if she'd gotten it! I think part of the reason puppies are so cute is so we don't wring their ornery little necks sometimes!

BOL! Good puppy Zappa! One thing for him to bring it back and quite amazing that he gave it to you! :D

you have to wonder what runs through the minds. I have something for you on my blog

It is amazing the things they do as puppies and the memories we have of them as puppies.