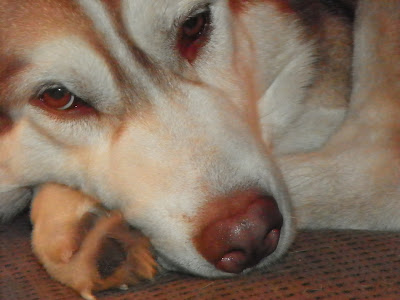 Have you ever had such a powerful connection to your dog that they are like your own breath?  Brut is my sound piece and my barometer.  Lately I've had a hard time connecting with him because I've been lost in my head.  When I plug in to Brut, I plug into myself.  He is more than an extension of me, Brut is as much a part of me as my arm or legs and we one in the same.  We understand each other because we think so much alike.  When I feel like the world is barreling down on me and I've lost my sense of direction with myself, I turn to find Brut.

I was riddled with anxiety and I needed to get out in the cold and snow and the Back Dogs followed.  Brut and I instantly clicked and in moments we were play fighting and challenging each other.  Grounding.  Centered.  We became entangled in each other as the worries and fears that plagued my mind began to loosen and break apart.  Contact.  We'd been missing out on contact.  Like a good back crack to my brain Brut broke through the walls that no one else could.  In this play I took him down and we wrestled in the snow.  Free.  Open.  The boundaries were broken.  The walls were shattered and we became as one.

What freedom!  What a release!  What joy!  The ability, to actually be able to connect so deeply with another creature who understands your needs and gives them to you...how do you really express that?  What kind of words can I put down that explains what that really means to me?  How can they describe my experience with such a finite vocabulary?

As play time winded down, I flopped on my back in the snow and laid there breathing for what seemed like the first time in months, when I was attacked with kisses from Brut.  He didn't stop.  He licked my face until I was drenched and when I sat up giggling he kept giving me kisses until he was lapping up my tears.  There was no question, he was glad I was back.
Posted by 24 Paws of Love at January 21, 2011
Email ThisBlogThis!Share to TwitterShare to FacebookShare to Pinterest
Labels: anxiety, Back Dogs, connection

I envy your bond that you share with Brut.
Leroy and I just aren't there yet, maybe some day we will get there:)

Such a sweet post... your bond with Brut is beautiful. :)

Brut and you seem to have an almost supernatural connection. Something like that is so rare, even between people. You are very lucky indeed.

There is absolutely NO better therapy that that of just being with a dog! And, those kisses are the best medicine ever!

Love those ahaa! moments when it comes down to that connection. Beautifully stated.

I truly envy you for this relationship you have with Brut. Aschiuta and I are rarely in tune, so I get just a glimpse of that reassurance.

I love the way you described that moment and thank you for sharing it.

That's a wonderful photo of Brut that says it all. Yes, I know that feeling that you're talking about, and for me, only one dog brings me to life like that. It's my chocolate K. She is part of me, and I'm lost when we don't have time to connect. I'm so glad that you and Brut had your special time together today.