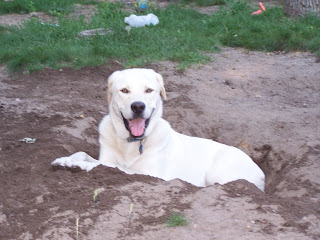 Today I witnessed a miracle and while it may not seem like much to someone else, it was rather sacred in our little home.  Chance let me brush him while he laid in one of his crater holes in the yard.  He was relaxed, calm and gave me a look of contentment as if to say, "That was just what I needed."

Two years ago, if I had a brush in my hand, Chance practically ran screaming trying to find a place to hide.  If I tried to brush him, he tried to snap at me.  Food and treats meant nothing to him if a brush was near and for a dog that worshiped food, this was shocking.  He was shedding heavily and  I was at a loss.  All my conventional methods weren't working.  So I had to get inventive. 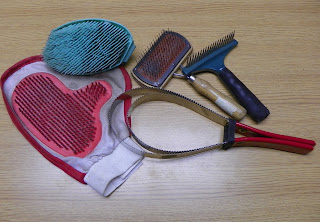 First I tried a rubber tipped glove to at least work out the dead fur.  It was a poor tool, but Chance wasn't threatened by it.  I spaced out these brushing very far apart, like weeks at a time.  So as not to overwhelm him and to see how he would handle it.  Then I moved to a plastic brush, also a hopeless tool for his fur, but it was great for getting him use to the feel of a brush.  My husband had much better success with Chance using this tool than I did.  Then I had a brain storm months later, a shedding blade.  It had worked for Fiona who was also sensitive about being brushed.  Chance took to the shedding blade wonderfully.  It was a total success from the start and Chance began to take treats again.  This meant he was accepting the brushing process.  HUGE STEPS!!  It was unbelievable.

So this takes us through the first year and a half, when I begin to infuse a wire brush into our brushing routine after using the shedding blade for a few minutes.  He took to that as well.  Soon that was all I was using on him.  No problems.  This spring I Incorporated a raking comb and he didn't even flinch.  Just sat down and waited for me to begin.  He is almost my best dog now for brushing.  So when I saw him lying in his crater alone because Blaze was gone for the part of the day, he acted like this was the best thing I could think to do for him.  He laid there just soaking in the sun and the comfort of being cared for.  It was one the most beautiful moments between us and all I could think of was how far we've come together in this part of our journey.  It must have been exactly what he needed today and our time was so precious, he never asked for a treat.  That was just incredible to me.  It was that tender and sweet.  He let me know when he was done and after a few hugs and kisses we enjoyed a playful romp with his toys.  It doesn't get any better than this.  Just me and my Chance.
Posted by 24 Paws of Love at April 22, 2011
Email ThisBlogThis!Share to TwitterShare to FacebookShare to Pinterest
Labels: brush, dogs, miracle

That is so, so sweet! It just, I don't know what to say even though it sounds cheesey but that it warms my heart! :) That's so special!

Yay! This is such a great lesson for folks who think their dogs won't tolerate grooming unless they use force. Patience and building trust are key.

I bet he wore off some nervous energy digging that hole! Sounds like you made some amazing progress!

It sounds like a golden moment for both of you!

Dropping off some Happy Easter woofs to you!

Awww...this is the fruit of your hard work and patience shining through - well done!