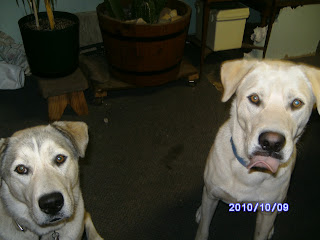 Do you see what I see, Blaze?

Have you ever had a dog that counter surfed?  OMD!!  I not only have one, but two, the Dynamic Duo of Blaze and Chance.  I have never dealt with this issue before in my life and now I have Double Trouble.  Both Blaze and Chance were returned to us as a couple of experts surfers.  The second I left the room, they were on the move.  They had master the moves so well, I could never catch them and that meant I had to use prevention.

Since the kitchen is Chance and Blaze's half of the house it meant that it was going to take a little more than just blocking them out.  First, I had to get this overly forgetful mind to remember not to leave things out that they could get.  Since they both liked to grab ANYTHING off the counters, not just food, I couldn't just throw whatever I felt like on the counter and table and walking away from it.

As I worked on mastering that painful technique, I began to teach them 'Leave It,' while I when I was fixing any food.  Since I was practically tripping over them while preparing my meal, I would tell them "Leave It," walk to the frig, come back click and give them a treat and praise them.  When we had mastered walking to the frig, I began to walk to the dining room and bathroom, (all part of their area) moving further and further away for longer periods, until I walked into the Back Dogs area and would come back.  The separation door between the two packs was always a trigger and here Chance and Blaze were sitting pretty, without moving a muscle.  I have even made trips to the basement with great success. 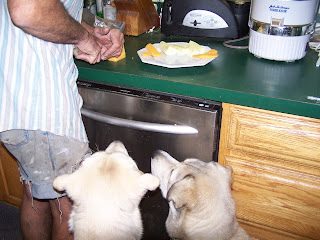 We dare you to step away from the plate, Daddy!!

Cheese is probably Chance and Blaze's all time favorite food.  Whenever I am having it, I  would grate some on the floor for them.  Recently I've been putting treats on their paws and the floor and asking them to 'leave it.'  They quickly responded to that.  Well, to really put them to the test, I had them both sit, told them 'leave it' and began to grate the cheese on the floor.  This can be rather tricky as it takes both my hands to grate the cheese and I have to act quickly if they start to move and need to block them.  I have done this maybe three times and they are doing fantastic!  This is like the ultimate test for them since before they could sit and start eating the cheese as it falls, now they have to wait until I give them the OK signal to eat.  It is so cool!!  Today I tried it again and they both did great and when I spilled my chips on the floor, I immediately told them to 'leave it' and while they both a little confused, they didn't make a move for the food, until I gave them the OK.  It is so cool that they are listening and learning and so am I. 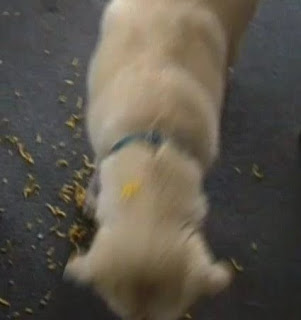 The counter surfacing has greatly decreased over the the last couple of years.  The motto is if I don't give the 'leave it' command, it is fair game, but the funny thing is I don't know how many times I have forgotten to use it and they still don't grab the food.  That's a miracle.  Funny how a little bit of training can have such a great impact.  What's also amazing is that really I didn't put a great deal of effort into it.  I've been using mealtimes for all different sorts of training time, so working on 'leave it' was mixed in with everything else.  Combine that with the leash training, sled pulling, playtime, and the consistency of love and I've got myself two fantastic dogs that keep on learning with me how to heal and grow.  Considering I thought I was doomed to have dogs surfing my counters, I'd say we're doing pretty good!!  :)
Posted by 24 Paws of Love at April 05, 2011
Email ThisBlogThis!Share to TwitterShare to FacebookShare to Pinterest
Labels: cheese, counter surfing, dogs, food, training

I really love the way you've come up with so many positive ways to teach Blaze and Chance better behaviors.

Maybe you'll inspire someone else with the same problem.

The Leave It command works very well here for many different things. But the Momster used mousetraps set at the edge of the counters when Dakota and Phantom were young because they were so bad about stealing from the counters. It only took a few loud snaps of the traps - no snooters were hurt:) - for them to stop the counter surfing. Thunder has never been a counter surfer, not sure why, and Ciara has only had a couple of times where she has tried. Mom says had she known better years ago, she would have used your technique too.

Frankie is a counter surfer extraordinaire too:) Luckily he hasn't realised that he could jump up on them .... yet! And he doesn't limit himself to food having destroyed or mortally wounded 3 mobile phones, numerous remote controls, shoes and other stuff I can't remember. But I'm getting much better at putting things where he can't get at them and he's also less inclined to do it these days. I do like your training methods for your guys. I must get around to doing some proper 'leave it' training with my 2.

Gees...and I thought these pups were going to be slicing the waves with their new surf boards...;-) Anyhoo, The Leave It command is the best thing since choco-lata-moka-brownies.....mmm!

Yes, it sounds like they are doing very well and learning...which is good because I know how annoying counter surfing can be. I have to use completely different "training" methods for my counter surfing cats, and even then it doesn't work nearly so well. I have learned the hard way not to leave ANYTHING edible on my counters, LOL.

This weekend I cut a bunch of meat to make stroganoff. I turned to get a pan and WHAM! Half the meat disappeared. Thank you Trixie.

Congrats on the training success! I see a lot of dogs like cheese. It makes for good healthy treats too.

It's really wonderful to see them learning more and more each day and become a bit more disciplined. I think that, when the reward comes, not only the dog is happy, but the human is proud too.

I'll admit, I started off with the image of the dogs literally surfing or sliding on the counters. Glad that wasn't the case. It would have made a funny "Tom and Jerry"-like moment though.

You are doing great...and the key words are consistency and love...powerful magic for all involved!

I'm impressed with your progress!

Well done! Counter surfing is annoying and can be dangerous, too.

Good advice, but my favorite part was the raining cheese!!

Way to go with teaching them leave it. Kirby is also learning this, along with "wait." I can drop almost anything on the floor know and he knows to wait, even with out saying it too! WAY TO GO!!! Keep up the good work with them.