How Did You Get That Name??

We think Mommy has been getting too serious around here and thought we should help lighten her load up, by doing the post ourselves.  We thought we'd tell you all a little about ourselves by sharing how we got our names.

Silver-If you're wondering what in the world our Mommy was thinking when she named an all black dog Silver, well your not the first.  It may sound strange but the thin white line on my chest is like a Silver lining and it stuck.  Although if I do say so myself, it is rather unique.  :) 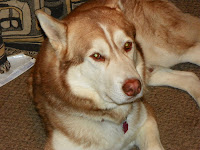 Brut-Well, Daddy originally named me after the men's aftershave, spelled the same way.  Little did they know that I would live up to that and more.  Hehehe!  Almost like a self-fulfilled prophecy!!  I think I fill out the name quite well, if I do say so myself. 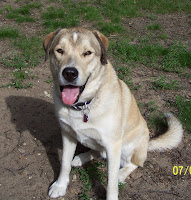 Zappa-I was named after Daddy's coolest guitar hero, Frank Zappa.  I was named before I was even born!!  I'm not quite sure who this guy is that I'm named after, but Daddy says I would make him proud!! 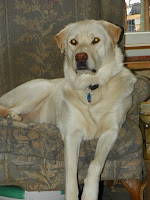 Fiona-Well, I was also named after a famous artist/musician named Fiona Apple that is one of Mommy's favorites.  She says I have the same diva, sultry style as this Ms. Apple.  I'm not sure who this chick is, but I don't think her voice can hold a milkbone to my howl!!  I honesty don't know what they were thinking when they decided before I was born to name me after this girl.  I'm thinking she should have been named after me!!  My sassy moves would outdo her any day!  The nerve of them!! 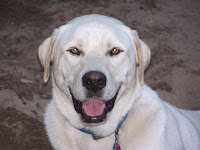 Chance-I was named Blue when I was born because of my blue ribbon to tell me apart from my brothers.  For some reason Mommy and Daddy couldn't come up with another name for me.  My previous owners finally gave me my new name, it fit like a glove.  Mommy says it's the best name that could have been given to me.  When I came back to live with Mommy and Daddy, the name fit even more, because I was given a second Chance. 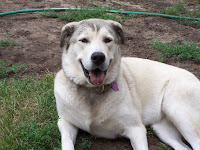 Blaze-When I was born I was named for the white streak down my nose .  It is hard to see now, but it is still there.  Little did Mommy and Daddy know it was going to mean so more than that!!  My previous owners tried out another one for a while, I don't think it ever stuck because when I came home to be with Mommy and Daddy I went right back to being Blaze and everything the name stands for!!  A Blaze of wild and crazy!  Believe me Mommy and Daddy wouldn't have it any other way!!  (wink!wink!)


Here are some of our nicknames that Daddy has given us:

Brut-Booter, Boot Head, Bruter Boy, along with a few names I'm not allowed to say!!  :)

So tell us how you got your name. Any funny nicknames?  What makes your name special and unique and do you think you live up to your name??

Posted by 24 Paws of Love at April 20, 2011
Email ThisBlogThis!Share to TwitterShare to FacebookShare to Pinterest
Labels: dogs, name

Mom says she chooses Maxx because she promised i'll have Maximum Love, Maximum meaningful and Memorable life with my human family.
I think i've lived up to that name, she always says i make maximum mess in the kitchen when she's not watching..

She adds the extra X at the end for X tra Special! :)

Well, Mommy wanted to take some time to think on my name, especially since she was still looking to see if she could find my old family. But, a couple days after she found me, she had to go away and leave me with my cousins and they said if she didn't name me they were going to start calling me "Javier" in a really girly way and they started calling me that. That made Mommy REALLY upset. One of the names Mommy had been kicking around was "Charlie" or "Charlie Brown" because I am a beagle and Snopy was a beagle and she wanted something a little more clever than just plain old Snoopy (even though she LOVEs Snoopy and has a Snoopy collection from when she was little.) One of my uncle's suggested "Bagel" as a name too so I became "Charlie Brown Bagel". Mommy seems a little sad about having to be so rushed about picking my name though because we have met alot of Charlies and even another Charlie Brown and she really wanted my name to be unique. But by the time she came back to get me from my cousin's house a couple days later I had already learned "Charlie" as my name and I like it. I even have a Charlie Brown name tag with the classic Charlie Brown shirt design on it! Mom's a pouter. She says when I get a baby sister we're going to name her Sally Brown though. That makes me wag my tail. :D

I was always wondering about the names. Zappa was the easiest to figure out, of course.

As Silver gets older, her muzzle will turn silver and everyone will find her name easy to understand.

B4 Honey was born, we were thinking about the name Stella. But once we met her, it was obvious to us she couldn't be anything but Honey. Stella was too big a name for her.

Great stories behind the names. We too often wondered about Silver's name. Phantom was named for Phantom of the Opera because he used to have a mask when he was a puppy. As he ages now, some of the black is coming back under his eyes.

It's nice to know how you all got your names and I think they fit each one of you perfect!
Leroy got his name for obvious reasons, and Sherman got his name because we wanted kind of a dorky name for his personality and that fit him perfect!

I enjoyed my visit to your great doggie bloggie!
Hugs and belly rubs to all,
~K

Cool! Well I'm named after some dopie red headed kid on a TV show. Mama didn't name me. That's what the rescue people named me. I answer to it. But I also answer to. Mr. Dawgins. Furry pants. Boosha Baby ( whatever the dog that is) DAWG! Dickens Dawg and of course I come running when they yell, "Outside?"

Accoring to the original kennel card from the pound -- those mean old people who took me to the pound instead of keeping me -- my name was Chewy. Both the rescue people and Mama thing that was an unfortunate name 'cause I like to chew. Mama has nipped that in the bud by providing me with a MOUNTAIN of chew toys. Really it's a mountain. We'll have to blog about it soon.

I'm used to my name now. Mama can't think of another name she'd have chosen for me. My hu-brother might have named me Kobe, I already know a dog by that name. LOL

Have a great day,

I love reading how everydog got their names! :)

You guys all have great name stories! Most of us had our names before we came here, although Lilac was named Line and Mom and Dad tweaked it a bit so that it was something prettier and easier to say. I'll just say that they still say "Lilac no!" a lot!

We always love to know where names came from...it is pretty revealing. Siku is an Athabascan word meaning "Ice" she melted the ice I put around my heart after Sheena our Sheltie died unexpectedly and suddenly of cancer. Quinn is named for the song, "The Mighty Quinn" momma always knew someday she would have an American Eskimo she would give this name to: "When Quinn the Eskimo gets here, everybody's gonna jump for joy!" Nuka used to be Angel but we added Nuka (LIttle Sister) in front of it because of her relative newness in the pack. At 12 and after a heard life as a mill breeder, we felt Puff deserved the right to keep her name, but to us she is "Puff the Magical" as she has survived so much including Stage 3 HW!

So neat to know how everyone got their names:)

I don't have children and my dogs have always been given 'people' names. Having said that, I don't think I'd call any of my kids Frankie or Beryl, lol.

Frankie just looked like a Frankie in the photos I saw of him before I got him from the rescue society, and it suits him:) Beryl already was Beryl and I was going to change it to Angie as she didn't know her name. But she is a Beryl and I like it.

Good sharing! I love hearing about the pup backstories.
We named both the girls after characters. Arwen is named after the Elf princess from Lord of the Rings (totally suits her) and Nyxie is named after the all black dragon, Onyxia in one of our favorite video games, World of Warcraft. Also as prickly as this dragon, Nyxie lives up to her name...