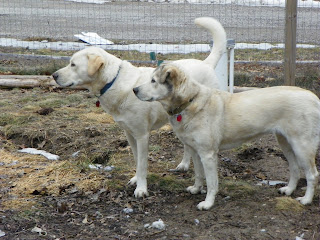 I came up with the brainstorm in order to condense time as night started to fall with the last two dogs that needed to be walked.  "Let's walk Chance and Blaze together."  My husband hesitated and hawed around, but reluctantly agreed.  So like the idiots that we are, we leashed up the two Front Dogs and prepared for our walk.

Now I don't know what brain cell I was working with but let me tell you it wasn't the smart one.  I never seem to really think through the actions and consequences with these spontaneous thoughts and for some reason I always go on the assumption that it won't be a big deal.

So we leashed the two powerhouses, they sat at the gate and once we were over the threshold, BAM!, they were off!!  They shot out like a couple of rockets and we weren't out of the driveway!  All of the sudden I'm trying to get control of a locomotive who has suddenly forgot English or any sense that I even existed.  Chance morphed into this burly mass of muscle rippling with sudden superhero strength.  I wrenched with all my might grasping at some control for which I was no match. 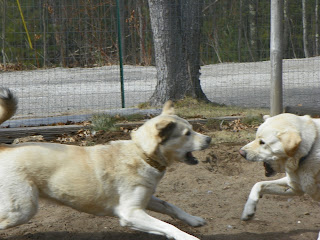 My brain started screaming at me,  "WARNING!  WARNING!  RED ALERT!" while I wrestle with this monster that had emerged.  My brain couldn't seem to compute the simple imagery I had of this idiotic idea and what was actually happening.

Chance jerked left and right, back and forth, while I had both hands on the leash.  I yelled, "NO!"  "STOP!"  "CHANCE!"  I swear to God all he did was grin at me like the devil himself.  He was loving every minute of it, as I was getting angrier and angrier.  He took that control and ran with it, literally.  Finally when we reached a certain spot, I turned him around and separated him from Blaze.  That's when I was able to calm down and get him to pay attention to me.  He calmed down a little and started to gain a bit of focus.  Yes that was me back there that you were heaving around.  Couldn't shake me loose, could you? 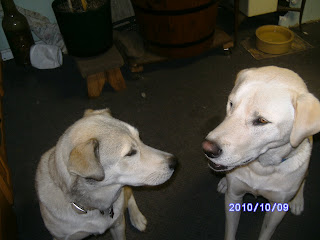 Are you thinking what I'm thinking?

Once we reached a turning point in the road, both dogs began to calm.  We were heading home.  I really couldn't get mad at Chance, being that it was a contextual position I put him in, I couldn't expect him to actually listen to me when he was with Blaze.  Although I'd like to beat myself with a 2x4 a couple of times for actually thinking there would be no problems taking them together.  I really don't know what I was thinking.  My husband said it best when he said, "They have a lot of power together don't they?"  Which is true.  There is a lot of physical strength between them, but it is the conjoined mental power that dominates.  It is like it overrides every part of their ability or want, like two forces coming together and creating a tornado.  It is mind blowing and astonishing and a bit intimidating.  Harnessing that kind of strength is challenging to say the least.  Every part of their beings changes when they are out together.  They seem to combine as a unit to become something entirely new.  It is awesome if you can witness it as long as you are not crying out for dear life on the other end of the leash!

How I could have forgotten the supremacy of these two beings when given the opportunity to unite is way beyond me.  Or how I thought that my simple leash training with Chance was going to influence him when Blaze and him combined forces.  Silly, silly me.  You'd think I'd learn by now.  BOL!!

I am envisioning you flying behind them ;) Wouldn't be so bad if they could go fast enough to keep your knees from scraping the ground ;) Hope you found a nerf 2x4 ;) Walkies are so much fun huh? BOL!

Live and learn! lol I guess we all have these moments of mental deficiency! At least, um, I'm glad it's not just me!

Well I guess they don't call it a Red Alert for nothing! I really could envision all that happening too!

Having been pulled over twice by my dog before Frankie and Beryl I can well imagine the drama you lived through:) And it's quite scary at the time!

I just got a flashback of an icy field, a 75 lb GSD, and what must have looked like me waterskiing with my butt low to the ground behind her....BAH!!

Thanks for the giggle :)