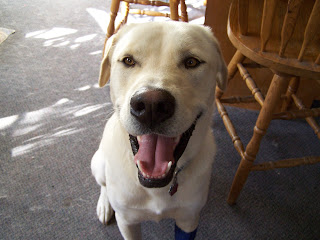 I have been a little lacking on my updates with Chance and his leash training, because up until recently I haven't been walking him as much.  We started picking up again at the beginning of the month.  I have been focusing on loose leash walking as he has the heel position down fairly well.  I've been correcting his tugs on the leash with a quick tug back and for the most part that has been enough.  If he begins to pull or his drive starts to kick in, I stop and wait for him to look at me before continuing.  It has worked out well.

Our last walk we had three great successes.  He always picks up speed when we reach the end of the driveway ready to cross the road.  This time he walked in a perfect heel position when we crossed and that was how our walk started.  That's when I knew this was going to be a great walk.

Second was when we started down a new road that he hasn't been on since he has been in training.  I had to reinforce his pull a few times, no little tugs were going to slow him down as he kept picking up speed.  So I had to put on the brakes several times, but again the reinforcements were working.

Our third triumph was when we happened to be stopped and a couple houses down a raccoon crossed the road.  This was the first time I've run into any wildlife on my walks with Chance and this little critter scooting across the road, was our first challenge for a dog a with a strong prey drive.  Once the raccoon was on the other side of road, Chance made one move to go after it.  I stood my ground, told him, "NO," and he sat back down.  Chance went back and forth between following the scent and turning to talk to me about his situation as if he wasn't sure I understood what was going on.  We must have stayed in that same spot for five minutes or more, as he continued to smell and talk to me.  When his body language began to calm, we headed towards the spot where the raccoon passed.  I wanted to gauge his reaction and see how he would handle as we got closer to the crossing.  When we hit the scent he went began to pull and whine.  So I made him sit, thinking that was enough for our training today and we turned around and headed home. 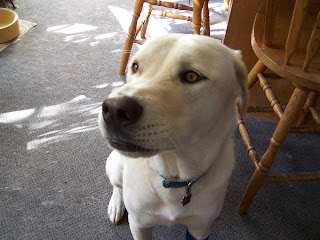 I was so proud of him for all three of these accomplishments, but the raccoon was the real test and I think he did fantastic.  I was utterly amazed that he actually sat when we first saw the creature, but was even more blown away when he kept seated, checking the scent and talking to me.  He only made that one move and never tried again.  I wish I had the whole thing on tape.  It was so funny and cute and so very mature of him that I wish I could show everyone how well behaved he was.  Even before that incident, I was thinking how much fun it has been training him and how much we have both grown together because of it.  As we now have a strong foundation and are beginning to build from there.  I'd say we are at a beginner- intermediate level now and it is so comforting to know that it can be done.  I have been thinking about Blaze next.  She will really put me to the test, but I've been building some confidence now and I am beginning to see the possibilities even with her.  I have been so afraid that after Chance being so easy to train, that there is no way to train Blaze.  What I am realizing even more than before is that is a learning process.  I am going to screw up and make mistakes, but that it doesn't mean the entire process is a mistake.  That I don't have to throw in the towel just because things didn't go as planned and that best I can do is try, try again.  For the first time in my life, I think that is pretty cool!!

Read about our last update and progress at We Are Still Walking!
Posted by 24 Paws of Love at April 29, 2011
Email ThisBlogThis!Share to TwitterShare to FacebookShare to Pinterest
Labels: heel, loose leash, training, walks

Chance is such a handsome boy. I'm glad he didn't try to drag you after the raccoon. The only 'wildlife' we have to worry about on our walks are the local kittehs. Bender and Barbie prick their ears up when they see them but are pretty good at not pulling on the lead or misbehaving.

Mom says she needs to do more of what you do on our walks. I say Pffffft! ;)

I think what a lot of people don't realize is how much doing training, of any kind, with your dog improves your relationship. And just like any relationship, it's always going to keep changing, too. There's a saying amongst Greyhound adoption groups that tells people "Remember that the dog you bring home today isn't the same dog you'll have a year from now, or even six months from now." You can either teach a dog what the boundaries are and have a relationship of respect (just like you wouldn't allow children to play in the street) or you can let them walk all over you, but you'll always teach them something! I'm glad to see that you're feeling confident enough to try training Blaze. Remember that even if it is harder going than it was with Chance, the payoffs are still worth it! :)

Great that Chance is making such progress! :)