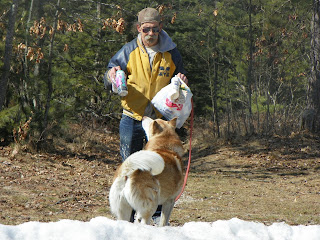 I am entering my 3rd month of walking the 24 Paws of Love every other day.  We have notice as the snow has been melting that the trash has been growing.  I was talking to the dogs while we were walking and we all agreed we had to do something about it.

So today, Brut and I decided to start cleaning up as we walked together.  Of all the dogs Brut is the one who has to stop the most because he has to mark everything he can.  Most of the time he would do his marking while I was picking up trash.  Everything from paper cups, empty pop bottles, beer cans etc.  It went really well.  Although Brut wondered why I was going off our path in a different direction to pick up something, until he realized he had a fresh place to mark.  We filled our one and only bag in the first half of our walk.  So I decided Zappa would have to pick up where his dad left off.  After my testing out trash collecting with Brut, I was beginning to learn this is going to take a lot of practice.  Since I was the one who was picking up everything and training the dogs isn't my forte. 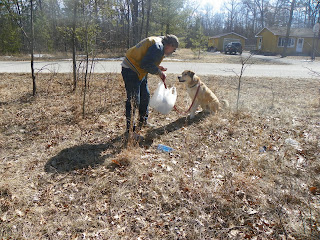 Zappa and I followed the same path that his dad took and when I walk him, he sweeps back and forth from left to right, throwing in a zip to the left and then to the right.  Which is really a good way to pick up trash, you can cover more ground.  It was obvious where Brut and I left off on our trash collection and it took Zappa by surprise when I went off our path to pick up a paper plate.  He didn't say anything but just enjoyed the detour for some extra sniffing. 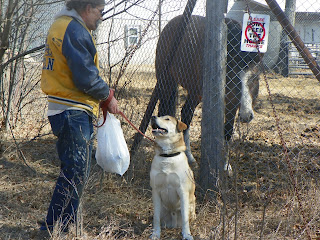 We even walked across the street so Zappa could see the horses that live on the corner.  The horses just looked at Zappa and Zappa looked at them, without barking.  I have a strong feeling that the horses knew what we were doing and it made them happy to know someone was finally cleaning up the neighborhood. 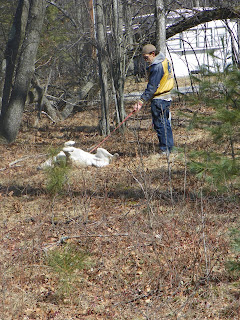 Picking up trash is hard work.  Halfway through Zappa decided he needed to take a break and a good back scratch.  Right then and there.  He just rolled over on his back and wiggled his little heart out but then it was back to business.  We had a neighborhood to clean up!

Zappa and I had a few tug of wars with each other.  He wanting to go sniffing one way, while I needed to go the other way to pick up another water bottle.  We got tangled a few times around trees and around each other, but all and all we got as much as we could into our bag.  Zappa felt good because he got a longer walk out of it and I was happy to have picked up two bags of trash for the day. 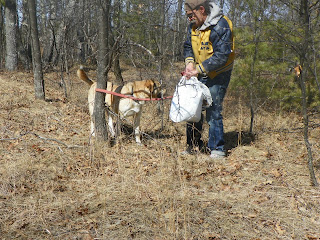 I decided I had a good start on our trash collection and that I would break it up between the rest of the dogs on our other walking days.  I will have Silver and Fiona do trash duty the next time we walk and Blaze and Chance will do it the time after them.  So that I and the 24 Paws of Love will be able to pick up our path three times a week.

On a more serious note, I'm wondering how long is it going to take to train the dogs to pick up the trash instead of me doing it?  I guess I will find out soon enough!!  :)
Posted by 24 Paws of Love at April 01, 2011
Email ThisBlogThis!Share to TwitterShare to FacebookShare to Pinterest
Labels: bark, dogs, trash, walks

should get the dogs backpacks so they can carry the trash!

OH, that is what we were going to say. If you follow Shawnee's blog, they uses a backpack to carry all the litter they find on hikes. Great effort, some peeps are really slobs.

I have been thinking about doing the same thing, I guess no one else is going to do it so why not me!
Thanks for motivating us even more:)

We do the ditches around here...winter's super mess!

What a great idea and wonderful effort to keep the neighborhood clean. I hope your neignbors appreciate all your work.

That's a great idea. My puppy could use a job. LOL We're surronded by corn field.

Yay! Good for you!

And I love the way you noticed how much fun it is for dogs to go off the beaten path. Sidewalks and streets are a human convention. Dogs love to zig and zag.

Looks like you've found a great way to make your neighborhood more beautiful and give some extra "oomph" to your walks.

Great job cleaning up the neighbourhood. We have a lot of junk piling up here too, but I see they're starting to rake it up and plant flowers and trees.

I don't know how you could train them to fetch the trash nicely instead of playing with it and making a bigger mess. It must be like the "bring the paper" trick.