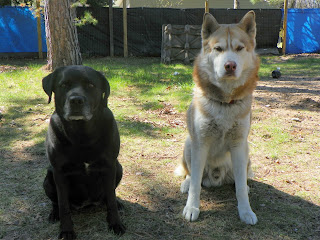 Having a real family of dogs, with a mother, father and four of their pups is a fascinating experience.  Observing the dynamics of the pups traits in relation to the their parents is quite unique.  While all of the pups exhibit genetic factors of their mother and father, in personality and behavior, there is a clear distinction of those that are more like Silver or Brut.  What I find particularly amazing is that this distinction is even more apparent because the pups are separated and always have been since Chance and Blaze came back home to live with us.  Which indicates to me that Zappa and Fiona are not just imitating their parents because they live together with them.  While there are many other similarities between the four pups that are mind blowing considering these four pups have not had contact since Chance and Blaze left home home at 9 weeks old, the personalities and behavior that stand out the most is that in relation to their parents.

Chance and Zappa are more so like their mother Silver than they are of Brut.  While all of the dogs are dominant in their own way, these two show more signs of submissions.  They are gentler by nature and have a quieter disposition.  While all of the dogs are independent thinkers to some degree, these two display a lesser degree of stubbornness.  Chance and Zappa's demeanor is quieter and softer without that rough edge of their father.  One of their more endearing qualities is the mothering instincts they received from Silver.  They are nurturers by nature and I find this type of affection in two males rather attractive and a beautiful gift.   I utilize this characteristic in them on a regular basis and never tire of this special bond between us.  Silver, Chance and Zappa are all foodies and have an excitement about food that will make them dance for their meals.    They never miss one.

Blaze and Fiona are much more like their father, Brut.  They are mentally and emotionally more dominant than their brothers and are always putting the boys in their place.  Whether it be toys or food, they have a fierceness in their hearts that they utilize to get what they want.  While they also have a tender side that they display only on their own terms.  Blaze and Fiona are also very independent dogs and every decision they makes more sense when they think of it themselves.  They are also the ones that initiate play and challenge their brothers to exert their dominance.  Brut, Fiona, and Blaze are also finicky  eaters.  It is not uncommon for them to miss their morning meals.  It is when they miss dinner that I have to worry.

Great family analysis. Dog behavior is fascinating and when you add in the family connection, it is even more so. We don't have quite the involved dynamic you have, but it is interesting to see the similarities between Thunder and Ciara who have the same father.

I was amazed that Honey's breeder was able to hone in on her personality before she was 8 weeks old. She really is a quiet and gentle pup compared to her sisters and brother.

You really have quite the science experiment going at your house. You can observe all kinds of things at close range about nature versus nurture.

My Human finds all this personality stuff fascinating. Personally, I'm more interested in action or sleepin'!

We have a mother and daughter here, and to say that Lilac passed on a few of her unique quirks to Blueberry would be an understatement! It's fascinating to watch!

Studying the family dynamic is simply amazing and wondrous. Our pack all come from different genetics and with the exception of Siku, came to us as older adults and to watch the White Dog Army become a family is simply beyond the imaginable.