This week I'm posting some of my "drafted" post that I was either to scared to post or too emotionally close to at the time.  This post happened a couple months back.  The results blew me out of the water and I always wanted to try it again, but haven't yet.  Let me know what you think.  :) 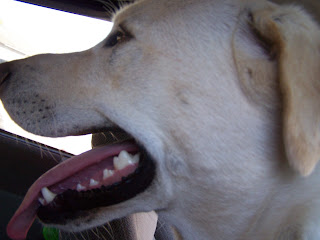 The two most significant car rides Chance has taken (that I know of) was when he left our home at 9 weeks old and when his owners called for us to pick him up at almost a year old.  I don't think he had very much car experience with his previous owners and his anxiety is always high.   I've been wanting to try some good association with the vehicles and make it a better experience for him. All I was going to do was put him in the truck, let him calm down and take him back out.  I went with the flow of the moment and the results were utterly fascinating.

I grab some treats, his favorite comfort toy, and act like we were going for a ride.  Chance hops in the truck no problem.  We sit for about 10 minutes while he settles down.  He is alert, but relaxed and probably a bit confused.

I debate for a few minutes whether to go any further.  I put the key in.  No reaction.  So I start truck and leave it running.

Chance's anxiety starts to spike.  He sits taller and his breathing quickens.  He goes straight for his safety net, the window, except that it is closed and he begins turning in circles.  For the most part I let him work things out since I know we will not be moving and he doesn't seem to want my help.  Since we are taking this in slow motion and there hasn't been a the rapid build up, his anxiety is quite mild.  I give him a couple of treats when he seems to be settling down.

The boy is fogging up the windows, so I turn on the defroster.  No reaction.

For the next 10 minutes, I witness Chance settle rather comfortably into himself and he is solid.  He is looking around, studying, observing and doing great!  I am so proud of him.

I teeter whether to go further.  Finally, with direct but slow motions, I put on my seat belt, step on the brake, and put my hand on the gear shift.  No direct reactions from Chance, but I can tell he is very aware.

As soon as the truck is in gear, he is in a mild panic.  His body is taunt, ears slightly back, he is sitting, but he crouches low as if on guard.  He continually turns his head and darts his eyes back and forth as if waiting for the devil himself to pop out.

The truck is in gear for 15 seconds top.  Chance is gone.  Whatever this fear means to him, he is in it.  I turn off truck.

We sit in silence while I observed him gain his surroundings and ground himself.  I sense he doesn't want to be touched or comforted and when I gently call his name, he isn't able to give me any eye contact.  Wherever he is at, I know he is still with me and I can tell he feels safe.  He acts like he wants to work this out for himself.  It takes about 20 minutes for him to be almost back in his skin again.

As we got out of the truck to take a walk (his reward) we found ourselves a bit disoriented and out of sorts that I cut it rather short.  When I went back to grab my purse out of the truck, Chance jumped right in when I opened the door, which I thought was a great sign.  We stay in the cab for a few minutes with his head in my lap and just held each other.  Then we got out and joined Blaze for a good romp outside. 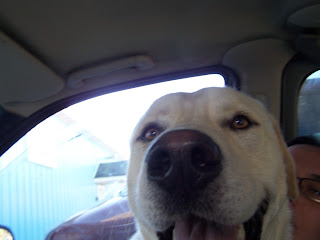 Our entire "outing" was about 45 minutes long.  Slowing the process down gave him time to process what was happening while letting me gauge his reaction more precisely.  I was able to understand the intensity of each action and how they built up so rapidly.

About 15 minutes after the panic started and I was following Chance's eyes, something clicked inside me.  I found myself speaking out loud, about knowing how scary it is out there in the world and what it was like to never have a loving home and when you finally find one, you never want to leave it.  Ever.

I heard Chance's head gently drop with relief on the back of seat the minute I started speaking, as if I'd finally got what he was trying to tell me.  He knew all too well about never wanting to leave home. And without a doubt, no matter how crazy he can be in the car, he always curls up and lays in peace when we are heading home.
Posted by 24 Paws of Love at April 04, 2012
Email ThisBlogThis!Share to TwitterShare to FacebookShare to Pinterest
Labels: anxiety, car ride, fear, furever home

Awwwe! Poor Chance! He probably associates a running vehicle with leaving home and doesn't realize he would be coming back.

Poor Chance! We hope his anxiety gets better!

How hard to see someone you love so anxious about something you know means him no harm.

It's good you're willing to go slow. Perhaps with some quiet moments just sitting in the still car, he'll appreciate the car for being a place for special one-on-one time.

Poor Chance. It must be so hard to see him so afraid. Even just reading about his fear made me tear up a little. Your patience with him is wonderful and I really hope that with more exercises like these he will one day learn to relax. He may never grow to love the car but hopefully it won't always be so terrifying for him.

You've got it down just right. Exactly the best way to approach his fear. Help him feel safe and allow him the time to sort everything out on his own and relax. It takes time, patience and commitment to change a behavior.

Good job, Chance. Keep it up.

Both Quinn and YoYoMa have had similar car reactions except no one in our pack wants to be left home, excluded from being with the Army. So the boys get seated right behind us within easy contact when we go for rides. Everyone is fine as long as there is petting and reassurance and you are so right...spoken understanding.

A very honest and insightful post. You are so good to Chance, looking at things from his viewpoint...

That gave me goose-bumps. How patient you are and the results are amazing! Chance just knew you were going to be his "rock". And you were.

Have you considered that part of it might be the motion of the car? Not that I doubt the association he has with being home, but Lilac and Blueberry were the first dogs I ever had who were very sensitive to riding in the car or van. It's the motion itself that gets them, but they both knew what getting into the van meant would happen. Lilac hated it beyond words and traveling was tough for her, but she handled it, curled up in a ball on the floor. Blue was a lot younger when we got her and she learned that getting in the car meant something good was happening at the other end. She doesn't like the actual ride, still, and she's ten years old, but she hates missing out even more. She shake and pant in the van, but when we get out, she's all smiles and tail wags because she beat it again and got to something fun. I wonder if it's possible that Chance has a touch of what they have. It certainly adds to the stress, but you can work through it!