Monday Memories-What Was Your First Pet? 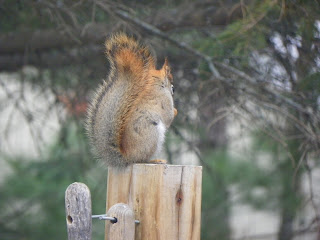 This post is in special thanks to this little Red Squirrel, who wished to remain anonymous who reminded me that I have loved a few rodents in my day.

See, I don't care for rodents.  Of any sort.  They may look cute and fuzzy but to me they are a nuisance and who's only good is being prey for the dogs to chase and occasionally catch.  So yesterday while I was in one of my funky morning moods staring into nothing land I see this Red Squirrel racing through the pines, across the fence and up and down the post at lightning speed.  He caught my attention.  Now I can appreciate the agility and speed of squirrels, as they are the true acrobats of the trees in these parts and as I watched him race and jump with such fine balance, I became pretty awed. 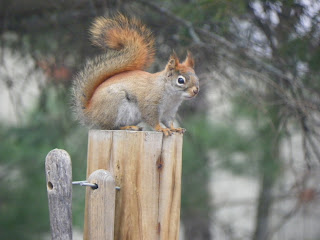 He sat up on the post flipping his tail at me as he wanted to know why I didn't like his kind.  Staring me down through the pane window and as I stared back, I told him, the disease you carry, the destruction, and that constant gnawing that never ends.  He turned tail and flew down the fence for more goodies.  After a few minutes he flew back up and sat at the top of the fence post to confront me.  Eye to eye he said with so many words, "Have you forgotten so soon?"  "What is THAT suppose to mean?" I quipped back.  "You once loved rodents too."  OMG!  My first pet!!.  I giggled as he wiggled his butt down to the stash of seeds in the grass.

My fifth birthday I received my very own guinea pig.  To this day I can not tell you his name.  No idea if it was a girl of boy, except that he was mine.  And although not the most active pet I'd ever owned.  He was mine to love and care for.  He was a long haired breed and I would comb him every night.  Clean his cage once a week and gave him carrots and lettuce as a treat.  He was the start of several pairs of hamster that would follow after his death. 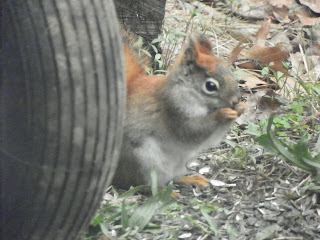 Mr. Squirrel flew back to the top of his perch feverishly munching on his seeds that he held with both hands.  I giggled again with a smile as I remembered so vividly loving that part of my little rodents pets.  Standing on their hind legs with their little jaws nibbling at top notch speed while they stuffed the pocket inside their cheeks until they were full.  I remember how cute and exciting it was to witness this storage habit as they "hid" seeds for winter in the corner of their cages.  I didn't know what they were doing at the time, but I just loved watching them do it.  I also discovered they were smarter than one might think.  We were always trying to escape proof the cage and we weren't always so successful.  I remember coming home from a week vacation and having to search the house, only to find one of my hamsters in the couch but still alive and well even with two dogs in the house! 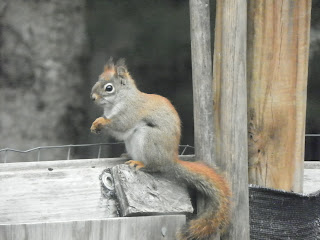 I smiled a thank you to Mr. Squirrel before he scurried away while he reminded me that he had a purpose too and it wasn't just to be bait for the dogs.  BOL!  Because of him I was able to reminisce about the my first pets that were all my own at such a young age and how and why I loved them.  Even they were rodents.   :)


So what was your first pet?
Posted by 24 Paws of Love at April 16, 2012
Email ThisBlogThis!Share to TwitterShare to FacebookShare to Pinterest
Labels: monday memories, pets, rodents, squirrels

I had a guinea pig too! I got them on my ninth birthday and I fed them with carabao grass. That was their favorite. I had to go around the 1 acre land with my plastic scissors and look for that grass. It was very difficult to pull out that I sometimes ended up with grass cuts (like paper cuts). LOL

Of course Mom's first pet had to be a dog. Her father brought home little Blackie in his inside coat pocket on the bus - she came from the SPCA pound. Mom was probably only about three then, but Blackie was her first memory of a pet. Blackie had a litter of three pups, one of whom died after a few days, but the other two lived to be 18 and 20 years old. The best part was that one of them lived with a neighbor and the other with Mom's cousins. So she got to see them lots. Thanks for letting her remember those happy days.

Just stopped to catch up with your happenings and say hello! Have fun this week!

My first pet was a Siberian dwarf hamster named Harry, when I was six or seven.

Awwwe! What a great story. My first pet was a Collie named Laddie. :)

My first pet was a little field mouse and later a cat named Pepsi.

P.S.: The mouse was long gone by the time the cat arrived.

We already had a dog, but my very first pet that was just mine was a feral kitten I caught at my grandmother's house. She was red and white and I named her Taffy. I was around 7 or 8 and my brother and sister and I raced around Grandma's backyard chasing wild kittens. Mom had told us if we could catch one, we could keep it. She didn't think we could catch any. We ended up catching 3. One each, and then one my mom saw that she liked.

.,wow that was a cute story and cute photos.,
My first pet was a little cute dog., I don't remember what breed is that but he's so cute and smart...

What an adorable story!
My very first pet that I could call my own was a bird named Georgio, he was a little finch!

My first pet (although I don't think he would have appreciated that word) was a wolf/dog mix. I loved him deeply and he was very protective toward me. I miss him to this day.

I also have a love/hate relationship with squirrels. They are perpetually uprooting the seedlings in my vegetable garden. But I could learn a lot from their courageous willingness to leap into space and trust the tree branch will be waiting for them. :)

Sounds like your squirrel friend taught you something today too.

My first pet was a cat. I was three, and I named her Buttercup. Even though I ended up being more of a dog person, cats were my first love and I'll always love them too.