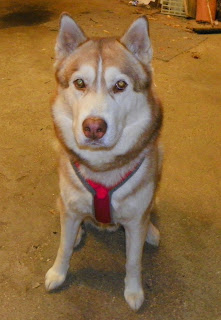 Mel over at No Dog About It Blog sparked this post with her post:  What do you find most beautiful in a dog?  Answering her own question with that she loves to watch dogs do what they were meant to do.    Having a family of almost Huskies lead me to answer her question with the natural ability our dogs have when they are doing what they were born to do, dog sled.

Which got my wheels turning about what exactly that means. 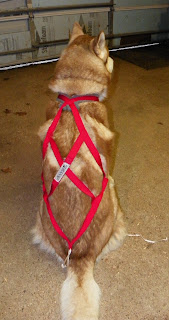 Brut's side of the family comes from racing lines.  That is all the info I have.  Before I even knew that much, the first time I saw Brut pull a sled, I knew instantly that something was different.  There was something more sophisticated in what I was witnessing, even though I didn't know what it was.  I 'd never seen a sled dog in action, but there was more to Brut than just a dog running with a sled behind him.

The lines in his body, his build, the structure of his bones and muscles were held in perfect alignment for his task, as if Brut and the sled were one unit.  It was if they were made for each other, like a key to lock.  Brut was the part that was missing from the sled and it's function.

As I dug further into this thought, my brain began exploding with light bulbs.  Their body, mind and spirit are specifically designed and tailored for sledding.  It isn't just the muscle or speed they can exert, it is a total engagement of their being.  They have been bred for thousands of years to be a well oiled and finely crafted machine with a heart and soul to match.


And Brut is only half Husky.  His children are three-quarter.  More specifically Blaze. 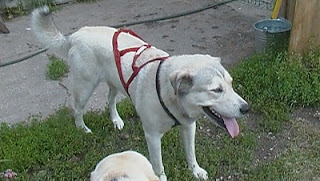 When Blaze runs she looks like she is flying.  She becomes very streamline, yet with such strength, power and grace it will take your breath away.  Her design is expertly tailored for lightning speed, quick thinking and agile reflexes that are demanded of the position of a fantastic lead sled dog.  She just soars even when carrying more than twice her own weight with flawless effort.  It is exquisite just to part of such majesty.

The thought that struck me most flipping through my memory files is how it is the entirety of the whole dog that is encompassed in the breed.  Bloodhounds, don't just use their extreme scent glands to track, their entire body, mind and spirit is engaged during the process.  It is the same logic that I struggle so hard with the dogs not pulling on a walk, they were born to pull.  They are designed by all fathoms of their nature to pull.  And since I never taught them any different, they continue to be who they are.  Pull Dogs.  Simple.  I am fighting up against years and years of selective breeding and it never really occurred to me that this isn't just their bodies I'm wrestling with, but the entire nature of who they are.  Any other way is against the grain.


It certainly gives me a greater appreciation for purebred dogs.
Blaze is by far our most Husky-like dog, with Zappa and Brut following close behind.  And there has always been something about them when they are pulling that I could never put my finger on that just stood out so differently.  They were just being who they were born to be. 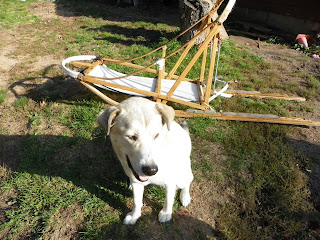 It's a bit like that with Greyhounds. You can't help but kiss us when we're curled on our couches, but the sight of us running is breathtaking! Deccy x

I know what you mean. It is in their blood- their genes- to be who they were meant to be and leaving them in their most natural way of looking life is where when an owner appreciates the beauty of a dog.

LOL, I love it when Peanuts burrows in every nook and cranny of our house- from under the cabinets to under the tables. It is what she loves and I love seeing her doing it... Aside from the fact that's its funny.

Just stopped by to catch up on your happenings and say hello! Enjoy your week!

Exactly! Dogs just have that innate ability that is hard-wired in their genes to do what they are suppose to do.

Anyway you look at it they are beautiful and breathtaking
!

That's so awesome! I would love to get Portia into sledding. Any advice for beginners?

I love watching sled dogs working together as a team. Watching any dog doing what they were born to do, in my opinion, is awesome.

I totally agree! I love seeing Greyhounds run because everything about them engages. I know that people don't like seeing coursing like they do in England with live rabbits, but it really is fascinating. Their entire being is completely focused on the job.

Actually, Kuster is another example of what you're talking about, too. He's from a line of dogs bred to do just what we're doing with him. He's still learning, but even from the beginning, he was using his nose in a way I've never seen another dog use his or her nose. He's a major puller, too. We're working on learning that pulling in the harness is okay, but on the collar it is not. Heh! He doesn't agree, and I think there will alays be some pulling from him, but hopefully not to the degree that I can't hold on to him. He already knows what his job is, though, and he's very driven to do it!

The beauty of a dog, or really any creature in the natural groove of their destiny is an emotional uplift. How could one not soar at the sight of a jumper mare taking a hedgerow, or a cat effortlessly climbing a tree, or a terrier ratting, or a concert pianist at the keyboard? It is such total, complete, focus and engagement that the poetry is overwhelming. Your insight is wonderful.

Dogs love to do what they do best! And we love to watch them do it!

They are all beautiful!