Monday Memories-A memory about a memory 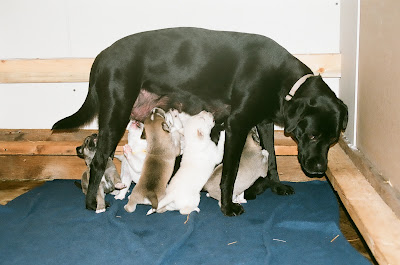 Geesh!!  The little piggies won't even let me lay down!!
My husband and I watched this awesome video this past month of Silver feeding the puppies who were about 4 weeks old at the time.  We wanted to share it with all of you, but we were unable to copy it as our DVR is broken and all of our puppy footage is on analog.

My husband went movie crazy with the puppies, mostly for the fact he wasn't able to be around much due to the double time at work that suddenly happened not 24 hours after the little guys were born.  So he was quite a insane about getting everything on tape.  He used to drive me crazy.

Four years later as we are watching this video segment, I feel like I'm seeing it for the first time, through my husband eyes, who is also seeing it for the first time.  It was one of many feeding sessions, Silver walks in the whelping box and the puppies bombard her. She does everything to dodge them and avoid stepping on them.  She is standing and they are on their back legs standing up all fighting over those precious teats.  Somehow some way Silver slips in a quick move and quickly lies down, the puppies attack her in a crazy fury.  Fussy, yipping, and in a constant chaos as everyone fights to grab on for that furious suckling time.

Watching every move of this feeding frenzy after Silver is down,  I step in the box to count the pups to make sure she isn't lying on any of them..  1-2-3 (Husky-looking pups), 1-2-3 (black and white pups), 1-2-3-4 (white pups).  Every time Silver was in the box, I was counting.  Every time the pups left, were in another room, outside, I was counting.  I never left their sides, except for my own necessities and always made sure they were all there.  I never thought once about it or that I was doing anything special, it was just part of taking care of our grandkids.

As we watched the video, my husband had this loving smile on his face and said, "and there's you, right in the middle of it.  You just got right inside Silver and her puppies from day one and became part of them."  As I sat there mesmerized by 10 little tails on the screen all wiggling at attention as their bellies were being filled and watched what became a pivotal point in our lives, his words struck me, and I smiled back and said, "I did, didn't I?"  I begun to realize how completely enmeshed I was in this world of our litter of pups that we refer to the "Power of Ten."  I told my husband as we continued to be swept away by this feeding video, "This is only an example of ONE aspect of the puppies that was a continuous cycle flowing through our home for almost twelve weeks."  And I remember being so stunned as I relived just a piece of that time period.  The sounds, the smells and the touch that reverberated through our home of love as we live and breathed these new lives that surrounded us.  During that time period I was so wrapped up in it, I barely had a moment to realize the miracle that had taken over our home, until my husband's words attacked my heart and soul with such a fierceness as we watched with new eyes and the swelling blessings of the never ending miracle of ten puppies. 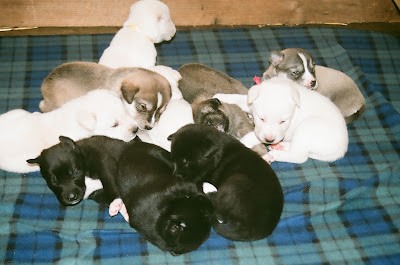 Just amazing what a pup or 10 can do to your spirit!!! That first pic is so funny and yet so beautiful.

10 wonderful little darlings born in a world filled with love and promise.

I bet if Silver could talk, she'd say you're the best human in the world.

You're also lucky your job was made easy by Silver being such a good Mama. Not all dogs are.

What a wonderful post! Silver was an awesome Momma!

That's a picture I never get tired of seeing...a mom and her pups. Love the last picture. What a great looking group of puppies!

Silver was certainly a good mother. Most of the puppies I've taken care of had to be taken from their mothers and that's a whole lot of work, too! lol

What an incredible series of moments to be able relive! What a gift to rediscover those first bonds, feelings, joys!

Oh puppies...how they warm my heart! These are adorable little things as well.

I'm always amazed at how mother dogs manage to dodge all of those little squirming, hungry bodies in order to lay down. I'd surely step on them all! They're caring and deft in a way that I envy.

Isn't it amazing how we just get in and do things without thinking about it....and then how someone can point out to us how great it was!

Such love puppies bring into our home...and it stays forever in the form of adult dogs (who still think they are puppies!)Love the pics and can't wait to see the video!