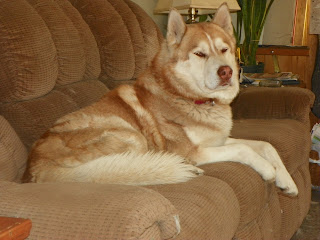 I told you I could do it MOM!

If you've read for a while, you'll know that Mark (hubby) isn't much of a dog trainer, he sucks at discipline, and he's really just a big kid around dogs.  But there is one thing he is superior at and that is handling Brut with strangers.  We had company this weekend and hubby had the chance to prove me wrong, again and I was proud of it.

It is rare for us to have company around here.  With the house being overrun by dogs and Brut being so territorial  and protective we aren't able to put anyone up for the night.  So our visitors stayed in a rented cabin just a short walk from here.

Hubby with his magic touch put a leash on Brut to meet these folks that were new to him.  I'd practically had an anxiety attack the night before when Mark told me his plan.  But I choked down my fears, said a few prayers and left the morning walk in the hands of my husband.

Since I would be a nervous wreck and would be trying to control the whole situation I stayed home.  Here's the story I got:  Three adults and a six year old girl.  Brut took treats from all of them and was on his friendliest behavior.  No barking, no lounging, no nothing.  He was the best dog ever.  He was completely out of his territory and you would have thought he did this all the time.  Mark was so proud.

Since Brut considers the entire neighborhood and the local park his turf, I have never had the pleasure of witnessing this awesome display of what happens when Brut meets someone.  Brut has done this several times with Mark on different occasions when they'd go for rides together.  They make an awesome team.

And what did Mark say when he got home?  "I wish I could have recorded it for you.  You wouldn't believe it!  Brut was an angel!"

And that's why it's worth letting the discipline slide. 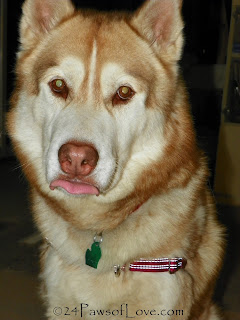 Posted by 24 Paws of Love at September 09, 2013
Email ThisBlogThis!Share to TwitterShare to FacebookShare to Pinterest