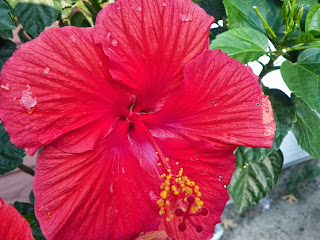 It was the last one.  He studied it while the garden associate came over.  He'd fallen in love with the three foot tree with the tropical red flowers.  Why not, he thought.  I can buy a plant for myself.

"This plant is so cool," he said to the associate.
"And it's marked down for our summer clearance," she replied.
"I'm buying it for myself, even though my wife will love it.  She has about 50 houseplants," he exaggerated.  "Well at least it feels that way," he laughed.  "She has plants all over the house.  What's one more?"

And with that he took his new friend, carefully placed it in the car to take it to it's new home. 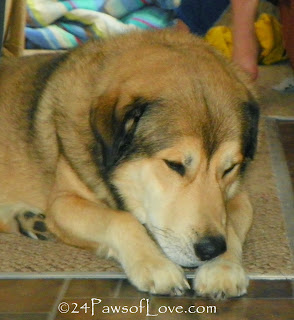 Grumpy 2008-2012
For the past year she'd been contemplating an important decision.  Every so often she would scan the memorial garden in the side yard and try to picture what she could plant.  Her husband and her lost one of their pup from their litter, a little boy named Grumpy.  The owners had chose to put him down rather than give him back to 24 Paws.  And it still felt like an open wound.  Grumpy was her husband's favorite puppy and he was still hurting that he'd lost his special boy.  She wanted to plant something just as special.  Something that said Grumpy.  She always tried to plant something that bloomed around the the month of their death.  They didn't know exactly when Grumpy died, just a vague guess of late summer to early fall.

She could only come up with two ideas for memorial plants for Grumpy.  One she didn't care for, as she had enough burning bushes and the other she was hesitant on.  It meant bringing the plant inside and the house was already full of large houseplants.  She wouldn't know where to put it.  So she was basically out of ideas.
As summer started to close so did her hopes on finding the right plant for Grumpy.
Maybe next year, she thought to herself. 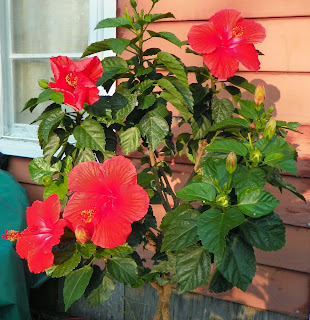 As her husband started to unpack the car, she noticed the red flower.  "Oh my gosh, you bought a Hibiscus!"  She exclaimed.

As she took it out and got the full sight of this exquisite plant, she felt a tingling at the top of her head.

"It's beautiful!  I can't believe you bought it." 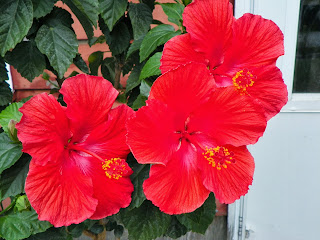 As she re-potted the exotic plant and watched blooms open every day it, the tingling came back to her.  A Hibiscus.  A red Hibiscus.  She never told her husband that exact plant was her first choice for Grumpy's memorial plant (who wouldn't have known a Hibiscus from any other plant).  The plant that she would have to bring inside and make room for during the cold months that she didn't think was possible.  And yet here it was in her home symbolizing everything that Grumpy was.  Bold, beautiful and a pillar of strength.


The plant he bought for himself, was the one she wanted for Grumpy in the first place.
He brought our Grumpy home to rest.
Two hearts beating for one.
Rest in Peace Sweet Boy. 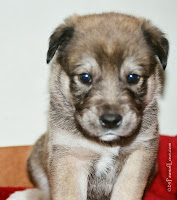 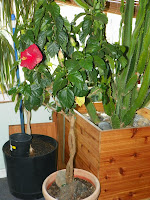