Brut and the Power of Love 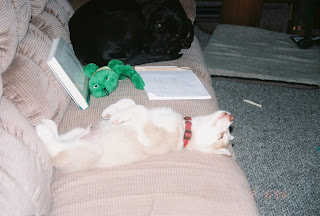 
At four weeks old a puppy learns from their mother and siblings how to be a dog.  Brut never had that chance as he was taken away from his mother and siblings at that time.  His mother couldn't teach about proper corrections nor did he learn how to socialize with other dogs apart from his litter mates.  Instead he was taught how to be territorial, possessive, and defensive from dominant adult dogs he was placed with.

When Brut and Silver had their litter of 10 puppies we were concerned how Brut would interact with the puppies.  When Silver allowed him in the whelping box, the pups were about 3 weeks old.  He had no problem helping with cleaning and caring for them.  He was a great dad.  When Brut would walk to the whelping box, the puppies would all run and greet him.  Brut's eyes would widen in amazement at all these little dogs running to greet him.  He seemed to be stunned by this act of love, he would look to us as if he couldn't believe all this love was for him.

And so began the healing.  He was a dad, rolling in the snow, letting them jump on him or chasing him around the kitchen.  His eyes would light up every time he saw how happy they were to see him.  All of this love from so many dogs, how much could one dad take?

It was in the following months when just Zappa and Fiona were left, the intense work began as Brut gave up his daddy title and took that of the alpha dog.  In the months that followed Zappa and Fiona taught Brut how to be a socialized dog.  Through powerful challenges and playtime they somehow passed on what they had learned from their litter mates to their father and taught Brut what I could not.  Zappa and Fiona helped to smooth out the rough edges and began to heal what Brut had been taught as a small puppy. The process took time and is still on going, but there is a strong bond of trust between the three of them.  Between my corrections and what Brut has learned about socializing within his pack, I am utterly amazed at how far he has come.  There is a calmness within Brut now.  A stability and security that I don't think I or any human could have given him.  It was the miracle of the birth of his ten puppies that gave him a gift he never had, the chance to be a dog. 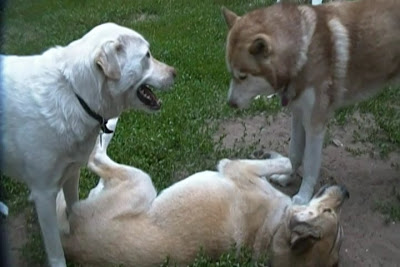 
Posted by 24 Paws of Love at August 16, 2010
Email ThisBlogThis!Share to TwitterShare to FacebookShare to Pinterest

What a great story!

Brilliant story and I love the photographs. This blog is excellant and a complete change from all the other everyday 'human' blogs. Dogs give unconditional love and your dogs look like they really love life. Mart

OH I loved it!!! Thank woo for sharing!

What a wonderful story - we are happy that Brut is healing. Those are some great photos too :)

This post definitely made me cry! So sweet, and I'm so happy to hear that Brut is healing. Thank you for sharing.

I was tearing up while I wrote it Pup Fan! It has been such a beautiful and painful journey with Brut and all the dogs. But so worth it!!

Thanks for sharing such a lovely story! That is one big hole the three of them dug.

This is such a beautiful narrative. Love it! Still wiping away the tears - of joy.

Thanks for posting.
Diane Wedler

*wags tail* Loved your story!! Brut is surrounded by great dogs and humans!