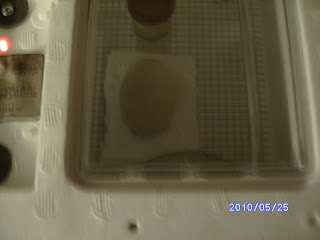 Lucky Ducky
(sorry about poor quality.  It was difficult to get a good picture.)

Last spring I had the chance to incubate a duck egg.  It was one of the most fascinating experiences of my life.  There is a process called "candling" where you can see inside the egg to gauge it's development.  By taking a box with a light on the inside and placing the egg over a small hole cut at the top of the box, in a dark room you are able to see the growth of the cells inside the shell wall.

What started out as a small heart and veins running through the entire inside, developed into a "jumping embryo" until it had filled half of the egg and was difficult to detect movement.  For some reason it really surprise me when the embryo started moving and you could feel life through the shell.   It was something right out of cell biology and was the most bizarre and beautiful thing I had ever witnessed about the beginning of life.

Due to the nature of incubating my time was completely invested in this little egg.  I had to turn the egg three times a day at regular scheduled intervals.  Due to the poor quality of the incubator I had to constantly regulate the temperature as it didn't have a thermostat and there were some scary moments when the temperature spiked or dropped.  Even when the temperature was fairly stable it still fluctuated and I had to continually check and make adjustments throughout the day and night.  I also had to maintain the humidity inside the incubator.  I was on constant alert with this little guy and did plenty of worrying and fretting like any new mother-to-be who had the responsibility of this tiny life in their hands.

Sadly my baby duck died before he could hatch.  I took his death pretty hard as I had watched this incredible life form before my eyes.  I had already had a name picked out:  Lucky Ducky.  It wasn't original but it fit him.
It was such a blessing to witness this miracle of life and was heartbreaking that it ended as quickly, but I have never forgotten Lucky.  He now quacks freely with two of our other ducks that passed on before him.  There was something about actually witnessing the beginning of life that changed the way I view life and impacted me very deeply.  Who would have thought that an egg could bring about such love?  Watching Lucky grow was an awesome example of the miracle of life and the love that surrounds us.

Posted by 24 Paws of Love at June 27, 2011
Email ThisBlogThis!Share to TwitterShare to FacebookShare to Pinterest
Labels: duck, egg, love, miracle

Wow, that must have so hard to care for him and have to let him go. RIP Lucky Ducky!

Thank you for your nice comment about Sweet Pea. I will keep you posted. We are taking him in at 8:00 this morning for his procedure.

How heartbreaking that the little duck didn't make it. Duck mothers do not have easy jobs. Though at least they have the right equipment.

Thanks for sharing the links to those videos. I will have to check them out. It is a fascinating process, to be sure.

That is so interesting!
You have a heart of gold:)

That's so sad, but it sure was worth the try!

I'm sorry about Lucky... My grandma used to raise ducks and I got very sad when any of them died. You did try very hard to bring the duckling to this world and that is a wonderful thing to do. Most people wouldn't care that much.

My sister teaches high school biology, and every year, they hatch chickens. She's showed me candling with them, and it's pretty fascinating! It's always a little sad when some of them don't make it, though.

Yes, there is wonder in witnessing this transofrmation but it is you, wonderful friend, who is open and caring enough to see the beauty and love in the lifeforce! May you always be so amazed at life.

How very cool! Thanks for sharing this, although undoubtedly it must have brought back painful memories...