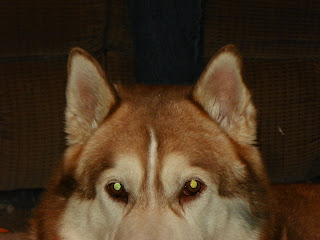 Dealing with Brut is sometimes like diffusing a time bomb.  It requires delicacy, patience and a gentle but firm hand.  The more we practice this approach with him, the more the root of his aggression begins to surface-FEAR.

Brut's larger than life exterior has masked much of the fear that runs through his veins and erupts into aggression.  As we began to touch on this fear we found ourselves dealing with a hurt and frightened puppy under that tough outer barrier and doing a balancing act between these inner and outer forces. 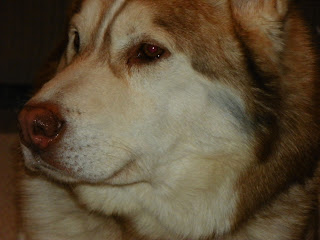 The fear is so painful for him, it is like a blow to the head.  It is the intensity of this pain turned inside out that expands into this grandiose image that he uses to protect himself.

I have known since Brut was young by his reactions that he riddled with fear, unlike any I'd ever seen in a dog, but he expressed it so violently it made it difficult to known how to handle it or even fully recognize it.  In the midst of a dog fight, my first reaction wasn't, "Gee, Brut looks scared maybe he needs a hug"  And while he did show his fear in other ways, there was no comparison to when he exploded with it.

It has been a long process.  For all of us.  When we began to help Brut make his decision for him, we turned down a road that is changing everything we know about dealing with a so-call aggressive dog and exposing that deep seeded fear that he has been protecting.  Finally we have found a way to work together and bring that fear out in the open so that it can safely be acknowledged and tended to.  Taking every measure we have with all the time, love and patience that Brut needs to heal from it. 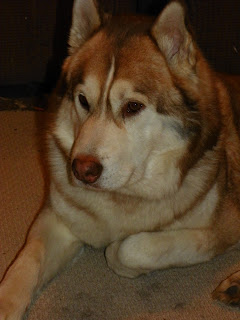 The progress has been astounding.  No fights or threats of fights and only one small altercation that was diffuse quickly with no one getting hurt.  It is amazing.  Every step taking us further into the complex mind of a dog who learned way too early that he had to protect himself to survive.  It is working.  It IS working.

And as we continue into the next phase of our journey, we can not imagine where it will lead us, but know there will be oodles of hope along the way.

You can read the basis for our new method dealing with Brut's flare ups HERE.
Posted by 24 Paws of Love at January 26, 2012
Email ThisBlogThis!Share to TwitterShare to FacebookShare to Pinterest
Labels: aggression, dogs, fear

If only all people would take the time & trouble to really understand their dogs and not just turn them out when they aren't perfect. Deccy x

I agree with Declan. It's not the dog's fault and when we don't take the time to try and understand what's going on with them, we can't help them.

I always love reading about the progress that you're making. I know that I've said it before, but it's just so true. I'm so happy that Brut is learning to cope better.

And I agree with the others - he's one handsome dog!

Some dogs are just born with fear, I think. I'm glad that Brut is still moving forward!

It's just so great that you've found something that works. Never give up hope!!

Brut IS beautiful, inside and out, and with your help he will find a way to feel safe and whole.

You have all of the tools you need: patience, gentleness, love and a desire to understand that wonderful boy. Your success is assured...believe in each other.

Brut is so lucky to have such a patient and wonderful family.

Such beautiful dogs. They really are like people with fur aren't they. Brut and the others are so lucky to have someone like you to love them and help them through their problems. Our little pug we kind of rescued also. Although we paid for him he was starved, and had a hernia and worms when we bought him. We spent the money fixed him up and now he is part of the family.
Enjoy some fun pictures, yours are beautiful.
Susan
http://www.squidoo.com/wonderful/pug/tatorbug

So often when people witness aggression in dogs, they experience so much fear that they can't see the fear in their dog. I'm so glad you've come to a deeper understanding of Brut and found a good way to help him.

I have given you an award over at my blog. Come check it out!

Our foster dog has very exaggerated and difficult on leash reactions to dog that I just assumed was a higher intensity of leash reactivity. After working with a trainer he pointed out all the behaviors that point to her being fearful. She is so confident in the home that I never would have pointed to fear, but now that it has been explained to me I am really beginning to understand her on a deeper level and make progress. Working with Brut sounds like it can be challenging, but it is fantastic that you do all you can to help him.