For every blogger that I have encounter, we dedicate this next post to you as part of our Dedication Week.  It is the collaboration of every tale you tell, every cute, funny story and every heartache that you share that has given me a place to come and be with those who understand what a dog's love means.  A love that is still transforming the nucleus of our personal dog universe and creating a trickle down effect. 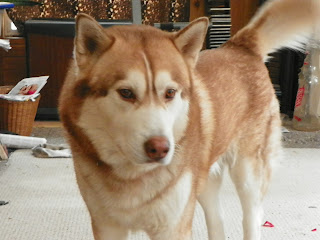 The King
I started out on dog forums in a desperate attempt for information and was chastised for Brut's dog aggression .  I took some hard blows from this forum right about the time my husband kept pressing about starting a dog blog.  I could barely fathom the thought.  It hurt bad enough to deal with a behavior that I could barely understand and I was certain blogging about him would open me to more criticism than I could bear.

I honestly don’t know how or why I but I began to check out dog blogs.  Something must of sparked because I suddenly began putting our site together and despite all my fears and apprehension, I bit the bullet and we created the 24 Paws of Love.

I was cautious, I felt my way through and the feedback was positive. I began to test the waters a little further, with THIS POST, and not one person slam me for Brut’s nature.  The ice broke. 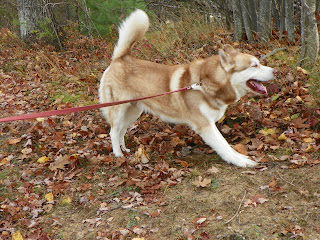 Just think about what you've been a part of
From that point I took each step in those icy waters and found other dog lovers who may or my not have understood, but were open and empathic to a degree that completely blew my mind.

I began to change, which meant Brut began to change because I was able to be open with you about the real struggles, the issues, my fears and sorrows.  Your acceptance became mine and helped to speed up an evolution of change to bring us to where we are now.  I still can not believe it. 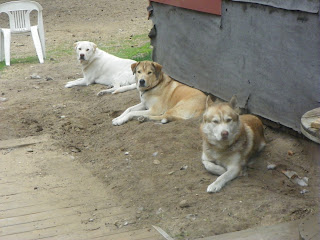 The trickle down effect
The hardest thing about having a dog that is dog aggressive is accepting Brut as he is.  I would have never thought that my husband's crazy idea would change our lives in a way that were so positive and rewarding.  And whether you agree or not with our situation, your acceptance of Brut has created an impact on the 24 Paws of Love as a whole by helping a wonderful family of dogs in a bizarre circumstance to feel right at home. 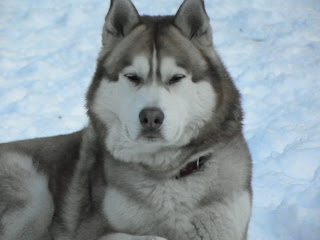 Because as the saying goes around here:  "When Brut is happy, everyone is happy."  And we know he is happier than he has ever been.  :)

***Pee.S.  We are hearing rumors of snow flying the next couple of days.
Please keep your paws crossed!
Our last snow fall turned into treacherous ice and mud.
We are HUSKIES!!  We need SNOW!!**
Posted by 24 Paws of Love at January 12, 2012
Email ThisBlogThis!Share to TwitterShare to FacebookShare to Pinterest
Labels: acceptance, aggression, dogs

What a great story to hear! I know that the blogging world has really opened up my eyes and changed my ideas about how I live my life with all my furry babies. It is nice to know you are not alone in the daily struggles. So glad we found each other too!

I've always admired you for loving your dogs no matter what. When I first found your blog, I thought, 2 packs, that's craisins. But as I read your posts and began to follow your journey, I began to see it for what it is - Love. Your dedication to your dogs, no matter their problems, is something I think most people in this world could learn a thing or two from. And I am SO SO happy for you that things are looking up!

I've said it before, but you do your dogs so proud. Your an amazing doggy momma!

Plus Brut is a rather dashing man if I do say so myself!

We have never seen Brut as aggressive...it seems more like he just lives every part of life intensely. That can be a bit imtimidating to some but a soul filling thrill if you show him how to guide and channel that energy.

It takes someone...some family and pack...to be able to hang on until they reach the eye of the hurricane where it is calm and magnificent.

That was such a great story--Brut is what he is and that's a very neat dog. You've done well.

What a furry great story!!
We will keep our paws crossed fur snow :)

You know, I've seen you and your relationship with all the dogs really grow in the time I've followed your blog. I think sometimes, we're just in a place in life when we're ready to hear the right message. Brut may have grown to be in the right place, too. I think our dogs are always growing and changing, just like we are!

Beautiful tale and tail!! Thanks for sharing your story with us! Yes, it's amazing how much our dogs are teaching us each day, and here i am thinking that i'm teaching him stuffs..

What a great post! I went back and read your original post about Brut. Such a great story! Very heart warming.

What a super post. I so agree with you...we ventured into the social networking arena when Gibson started with his Canine Epilepsy and I sought out others who experienced it. Then I started chatting with other dog owners, then Husky chats, then I, too, began the blog. The people I have connected with are amazing. Full of support and experience, this is a great place to be! Brut is so handsome, and so happy to hear he's happy (and therefore, everyone else is too!)