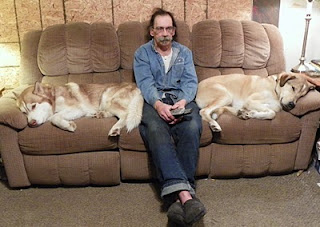 Not exactly the same set up, but you get the point.
(This is an old picture and the only one we have of Brut and Zappa on the couch together)

Daddy's on his spot-the far right of the couch.  Zappa comes in taking his spot on the couch, the far left.  Brut shortly follows to take his spot in the middle.  Any other time, Zappa would have gotten down but not without some grumbles and growls while Brut would patiently wait.  My husband and I are engrossed in a show, when Zappa decides to stand his ground, warning growls erupt and Brut is halfway on the couch.  Brut starts to slide on top of the couch, both dogs snapping and snarling until Zappa eventually retreats.
Zappa is on the far side of room standing, Brut is on couch and there is a low roar between the two of them.  Daddy ask Brut to get off couch, Brut complies, but can't get him to sit.  That's when I realize Zappa is standing and tell him to sit and lay down, he responds.  Brut immediately gives his attention to Daddy who sits and lays at my husband's feet.  (Thanks Five Sibes!!)  Brut was not about to "submit" to Zappa, Zappa had to go down first.

The entire atmosphere even from the time this scene started was warm and calm.  Calm enough to think through and clear enough to respond quickly.

This encounter happened a couple of weeks ago and I am still reeling in the excitement.  I don't know who's response surprised me more, my husband or Brut.  This hands on method we have been practicing is doing wonders at bringing down the levels of intense energy that is usually emitted when their is a altercation.  Before a situation like that would have escalated with a emergency-panic reaction.   And my husband was phenomenal.  I can not begin to rave about how this calm, but direct method is changing everything we do AND my husband and I have found a way that we can both work with the dogs in a language that is easy for both of us to understand.  The results have far exceeded what I could have ever dreamed.

What a wonderful lesson of never giving up!!

Tomorrow I show you how we are getting to the root of Brut's aggression using this method.
Posted by 24 Paws of Love at January 25, 2012
Email ThisBlogThis!Share to TwitterShare to FacebookShare to Pinterest
Labels: dogs, fights

Positively awesome indeed! We are so very happy for you all!!! Persistence pays off!!

Great news! I am so glad that you have found a method that works well for everyone!

That is wonderful and giving up is never an option!

That's great! You must be very happy this is working!

Love it! Keep up the good work!!

Congratulations! What a wonderful feeling. It sounds like you handled this potentially disastrous sitaution like dog training professionals! I am so proud of you for remaining calm throughout. That is no easy thing.

glad that it is working. it's like magical chairs on the couch!

We love to see progress and success! We have been using the same technique to curb YoYoMa's challenges to Quinn...it is amazing how quickly both have learned to "ramp down" without incident.

Thanks for your kind and generous offer to donate to the All in the Name of Love Auction. Crossed Paws is seeking any items (of course, pup stuff)for dogs, kitties, humans. Can be gently used (like a CD collection, for example). If you would like to donate please e-mail a short description plus a photo to 'crossed-paws@gmx.com' They will be sure to get your item up on the auction blog. then after the auction, you simply send item to the winner (you might want to specify USA bidding only or winner pays sipping since overseas shipping can be expensive). Thanks so much.

I read your previous post and found it most helpful. I know my agitation adds to the situation... but I can't always get to them fast enough. Very good tips!