A Great "Sledding" with Zappa 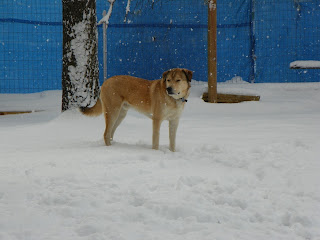 Before I pass out on the keyboards let me tell you about my fantastic time "sledding" with Zappa. 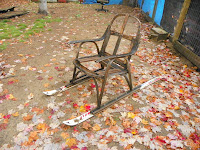 So I'm walking Fiona through this little wooded spot across from our house and like a light bulb exploding, I think, "I'll try out Zappa on these small trails."  Which I've been thinking about all summer, but it just now hits me like a brand new idea.  So when I get home, I get the little sled (the homemade version) because it will work better through the small trials.  Zappa is so excited that no matter what I say to him, he won't sit to get his harness on, until I ask him if he wants to pull.  Boom, butt to ground.

This "ride" would be classified under "New Context," since we usually just cruise down the road, turn around and come back.  So I get him hooked up and once he is on the trail, Zappa is doing good.  I've got one foot on the runner and I'm am pushing off with the other.  That's when it hits me, the snow is wet and heavy.  HOLY CRAP!  I'm going to have to run with Zappa.  He's not going to able to pull me.  So like every instant idea that pops into my head, I didn't plan this part out!!  We make it to the field and I am hopelessly trying to run with Zappa, who is still trying to figure out what is going on but handling it like a champ.  While he is staying a good trot, pace wise, I'm doing my best to keep up running in wet snow, 4 inches deep, in my heavy boots, blazing our own trail while trying to hold it together for Zappa's sake.  Did I mention I forgot my Superwoman cape in all the excitement??

After we are about half way through the loop I want to take, trying to show Zappa the way, while also having to untangle him each time I praise him because he would stop and turn around when I did;  I always think back to a mushing meeting we went to back when we were just starting with Brut and someone asked if you needed to be physically fit to participate in the sport.  While the speaker seem to skirt around an answer at the time, I always bust out laughing about halfway through a run and think HELL YEAH!  You better have some kind of stamina or gusto and a few muscles or your dogs will leave in you in a white dust  On and off the sled, guiding, untangling, running along side, or behind and starting all over again.  In fact it more common to be off the sled than one when training sled dogs.

I'm breathing so hard from the running and the excitement my heart feels like it is going to burst through my chest.  Zappa is concerned at times, maybe a little worried but he is trusting me which was the icing on the cake.  After the umpteenth time of untangling him, I wasn't sure how well he was going to hold, but he did great!

Then he had a bit of a glitch, Zappa stopped and turned around too quickly getting the sled wrapped around him and when he tried to get away it stayed with him.  He freaked out for a second, and was a bit scared to go again, but I got right up front with him and ran along side and you could feel his confidence soar as well as mine.  I slid to back of the sled and we ran the last couple turns of our loop together as smooth as silk.  We were both cruising like well oiled machines at this point.  I didn't even notice my legs were moving so fast, we were that in tune with each other.  So when we poked through the trails again, I told Zappa, "Let's go home," and he did.  Turning on the next path that lead to our house.

I was completely ecstatic!  With the snow conditions, going on a new route, not knowing any turn signals or commands, Zappa did great!!  And what a blessing it was to run this new course without the added fret and worry of cars, people or dogs, as it can be going down the road.  I think we were both on top of the world.  And the trust that has been building between us is paying off.  I know I say it every time I post about dog sledding, but I will say it again...THAT was the best ride of my life!!

Posted by 24 Paws of Love at January 07, 2012
Email ThisBlogThis!Share to TwitterShare to FacebookShare to Pinterest
Labels: dog sled

What an adventure! Wish we have snow here!
With your story it's like we're there with you! Thanks for sharing!!
Enjoy your weekend!!

What an amazing story. Never lived anywhere with enough snow to see sled dogs in person let zlone think about how they are trained. If you would be interested I would love to have you write a guest post about your sled dog family.

How cool! Can I go sledding with you too?

T. Maxx took the words right out of our mouths. We felt like we were there with you too, and oh how we iwsh we were. We have NO snow, not even enough to snoof our snooters in, NADA!

Awesome! Zappa must have been so thrilled.

Aw, good job Zappa! I love learning about sledding and sled dogs-they are so amazing!

So I guess you're telling us you burned off all those Christmas cookies. :)

We felt like we were right there with you guys! Excellent job!!! xoxo Chloe and LadyBug

What a great sledding time you and Zappa had on so many fronts! Yay! :) That trail sounds like a blast and yeah, you must be in some kinda shape to keep up with him in your boots on wet snow. Wow! You go girl! :D

That sounds like a wonderful fun thing to do!

Wow, I'm tired just reading about it! Though it does sound like a lot of fun. And of course it's even better when it's so obvious that the dog is having fun too.