This post is dedicated to our readers and the dog blogging community as part of our dedication week, because without you we could not be sharing this wonderful news. 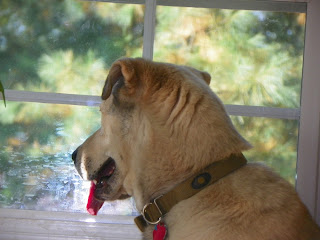 Where's that Chance?
I’ve dying to tell you about the progress of Blaze and her separation anxiety with Chance.  She has went from having straight panic in her eyes that has turned in pure excitement.  It has been so much fun working with her.  Before I get too far ahead here’s a little background:

Chance and Blaze grew up with related families and their bond is one of the strongest I have ever witnessed. They were both abused and only had each other. So when one is gone the other is in a constant worry. Blaze's anxiety is stronger than Chance's and so when Chance leaves, say to go for a walk with Daddy, Blaze would fly into sheer panic. 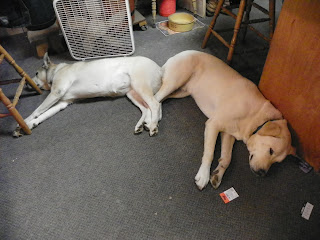 Separation Anxiety?
Not us!
I had heard to try and let the dog work it out for themselves.  The anxiety only intensified, so I began with clicker training and had her sit, click and reward. I did this for some time, building on the commands. Eventually she began to come to me and sit on her own when Chance would leave. I was quite amazed at this progress. I added in talking in a soothing voice, brushing, and petting to give her the security she needed while also making it a game of waiting and watching for Chance to come back.

One day I was in the middle of a project that I could not stop and when Daddy and Chance left, Blaze wandered around a bit then laid at my feet. She wasn't whining or crying or pacing. I couldn't believe it. This was such great progress!!  She was alert but her body and eyes were calm. She was confident and secure, not the manic mess I was used to witnessing.  Something was working. 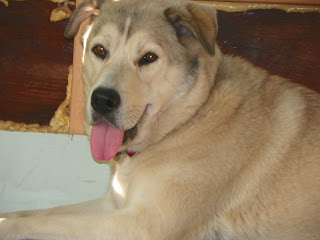 Chance, Shamance...Where's my treat?
Then we even took it a step further:
Daddy and Chance left, I was in the basement. I came up when they left. We did our clicker training thing for a minute. I told her I believed in her and that she could do this, I left telling her I would be right back. I went back downstairs to finish stacking wood and when I heard her start whining a little I talked to her through the floor and told her "just a minute." (a trusting phrase the dogs know) So when it was quiet, I went to say hi, talk to her for a minute, then repeated everything again. I can't remember when I have even seen her so confident and secure with herself. She was truly beginning to believe in herself and her pride was showing.  It was awesome! 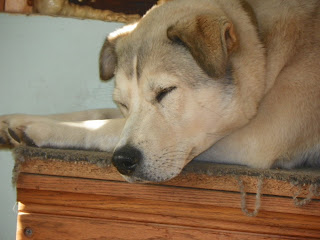 Now when Chance leaves Blaze can barely contain all her excitement because of all the wonderful and great things that happen when he's gone.  And let’s not forget when he returns, Blaze gets the best reward ever.  A walk with Daddy.

And it doesn’t get any better than that!
Posted by 24 Paws of Love at January 11, 2012
Email ThisBlogThis!Share to TwitterShare to FacebookShare to Pinterest
Labels: anxiety, dogs, progress

You have done so well with each of the pups. Both Blaze and Chance have benefited from all your hard work.

We love that last pic.

Congrats on getting her to a happy & secure place! My dogs (all 3 of them) howl, cry & bark when one of them gets a walk and the other two stay home. Sigh. However, Maggie & Sadie are so used to me leaving to go to work with Hurley that they don't even get up when we're getting ready to leave. I'll have to try the clicker training next time I have a chance. You're always full of useful tips and loads of experience!

Wow, reading about Blaze's progress is really inspiring! It sounds like you are doing all of the right things with her! They both sound like they are doing well, and that's so great considering what they've been through... you are amazing to give them all of the attention they need and to help them through their transition period. Keep us updated!

Check out the App store for Android and iPhone to download our mobile application! Simply search All4UrPet.

If you have not visited my blog ... we finally did the blog move to WordPress...Visit my new (WP) blog: www.sugarthegoldenretriever.com
In order to follow my blog, subscribe to my blog feed (details on my blog) and/or add/update my url to your blog reader. Lots of Golden Thanks

That is pawesome news!

What a great story:)

Your doing them so proud <3

I love those moments of recognition that slowly, over time, one of the pups has bloomed just a little fuller and brighter! Sometimes there are no words and the pup wonders why I am hugging so tightly and have wet eyes. Great and patient job helping Blaze make this leap.

Wow, that's really great! It's so good to read about all of the progress that you are making.