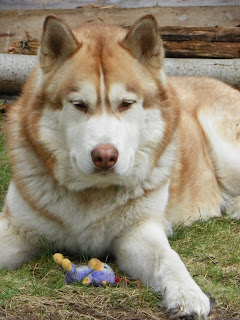 MINE!!  GOT IT??
I find it really difficult to narrow down five years of witnessing Brut's aggression without bringing in so many contributing factors, but I am going to try to break it down to the two that I believe are the most important and that I have witnessed repeatly:  the natural act of protection and an over-exaggerated hierarchy correction.    And while I am not a dog trainer, behaviorist, or expert on any kind on aggression, this is what I have observed in my own home with my aggressive dog Brut.

I talked about Brut's upbringing in the last post that created a prime example of Brut's need to protect himself and his valuables.  The most important of these has been himself and because of that Brut has built this circumference around himself that expands and contracts.  Sometimes slowly and other times, depending on the circumstances rather quickly.  This firewall around Brut is his own personal boundary line and any one crossing without permission or heeding that first or second warning will find themselves being corrected by Brut. 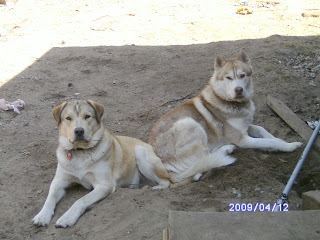 A very rare moment of Zappa (l) and Brut (r)
No one knows this better than Brut's son Zappa.  Zappa likes to test and push that boundary by challenging back, because Zappa almost always refuses to back down to Brut.  From about the time that Zappa was four months old, Brut and Zappa had these challenges almost regularly for the first year or so.  Most confrontations were quite minor and didn't always lead to a fight, but others were more intense and there was physical contact.

An example is when they are chasing squirrels.  Brut and Zappa have a little hunting festival around the wood shed at the sight of a squirrel.  As you can imagine the adrenaline can get quite high and intense.  At first Zappa will keep a safe distance and will stay out of Brut’s way while they circle and search.  As they come up empty-handed but haven’t given up the quest, Zappa merges closer as Brut begins to let his guard down. Zappa takes advantage of getting closer to top dog position and possibility of catching said prey.  If there is so much an inkling of the squirrel Brut will realize just how close Zappa is, which makes him a sudden threat to his claimed catch.  With half a heartbeat Brut gives a warning to Zappa.  Zappa ignores it because he's too caught up in the game, or more likely isn't to back down and lose the ground that he has gained being "equal" to his father.  Since Zappa doesn't back down to the warning, Brut’s radius flares out catching Zappa in it and Brut uses a more direct approach to get his message across.  And what may seem like an attack out of nowhere for no reason, was Zappa not giving into his dad’s orders and Brut correcting him.

I have witnessed several version of this same scenario outside as well as smaller versions inside, although not every confrontation leads to a fight.  Depending on the severity of the line that is crossed or how valuable the possession is, the correction can be over in a couple of seconds or can be more severe lasting half a minute or more.  These are the fights that trigger off the deep seeded fear in Brut that a dog is trying to take something of precious value to him.  These are the ones that stem from those fears of abandonment and the fight for himself of never losing again what he lost.  And while these fights are more serious and take me to pull them apart, none of the dogs have had more than a bloody scratch at most, when you’d think they’d be more.  Amazing, isn’t it? 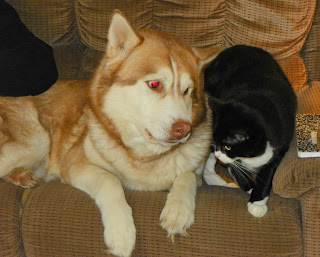 For a long time I thought Brut was the cause of every fight, when really it is a two way street.  Ignoring a signal from Brut is probably far worse than actually answering it, but no response is still a response.  And more time than not it is the unheard answer that explodes into the deeper fear and pain of his puppy hood that I have watched Brut displayed so many times.  These are not the teeth of a killer, but a dog who suffered severe emotional pain and trauma and is just trying to hold onto what is his.

And really can you blame him?

And one last personal note.  Have you ever witnessed or have had happen to you that a dog comes over and just seems to attack another/your dog for what looks like no reason?  I wonder if actions like this could be part of my hierarchy correction idea.  Like when a dog isn't even looking at the aggressive dog and it is still attacked.  Because I do believe any dog with aggression towards other dogs believes himself to be the alpha dog at every moment and expects an appropriate response to his actions and if that response doesn't suit him, he will attack to correct.  I wonder if any of you have experienced this and would agree or not.

Next post I'll delve into the Brut's touchy food aggression.
Posted by 24 Paws of Love at April 25, 2012
Email ThisBlogThis!Share to TwitterShare to FacebookShare to Pinterest
Labels: aggression, correction, dogs, protection

Not something we can really comment on... it's not much of a Greyhound thing. I'm amazed, though, that he lets the cat up close! Deccy x

Yes Ive witnessed Fred attack Haylie for no reason but then I learned and there was subtle things that would set him off. I had to rip them apart on more than one occasion - Nothing more than some puncture wounds thankfully. My problem is that Haylie would back down so it just made things worse. They were both fixed but from 1-2 1/2 was pure hell during those years , everything was a battle for Alpha.

We've witnessed Maggie attacking other dogs out of nowhere. I still don't know exactly what caused it but it was dogs she didn't know and immediately after meeting them. Always a smaller dog that wasn't a physical threat to her (ie, she could beat the crap out of the other dog). But whatever it was, we have finally trained the response right out of her and now she ignores small dogs. We just had a session with her and an animal communicator/energy healer who told me that a lot of her issues stem from insecurities and anger over her early puppy days and being taken from her mother way too early.

I don't think that her issues were from wanting to be Alpha. Maybe there was some protecting her pack, being frightened herself, a certain size dog triggering an emotional reaction that led to an attack. Those are my theories but I'll never really know. And for her thankfully, not knowing the exact cause didn't hinder us from working through her issues.

Yes, I have experienced the seemingly out of the blue attack. One of my dogs will go after my smaller dogs now and then, but I started watching them closely and then I could see the little subtle signs they give to the one that attacks them. So now when I see one of the little ones giving side glance or walk like they are feeling intimidated, I step in and remove them right away.

I've had to break up some pretty serious fights between a dog we're fostering and my lab who just don't seem to care for each other at all. This is a case with them of both wanting to claim the alpha spot and neither one willing to back down. The foster dog is a pit bull mix and gets along great with all of the other dogs and cats and is such a sweetie with us. He just doesn't like my lab and visa versa.

YoYoMa our wanna-be alpha will spend mealtime eating next to Quinn, and then laying in close proximity and then suddenly when they happen to just casually make eye contact while they pass in the room, he has just turned and grabbed Quinn by the rough. Quinn, though older and here longer, starts squealing and drops to the ground. Yo lets go and remorsefully goes to a neutral corner and it is Quinn that acts like the victor although neither is ever yelled at or punished, merely seperated. And oddly, this behavior has all but disappeared since Quinn has started having seizures, YoYoMa has become very attentive of giving Quinn space and understanding.

When we first got Gloria, she would lunge at other dogs and attacked Fred outside once.(it scared the crap out of both of us!)If she was sleeping and Fred or us touched her she would wake in attack mode. I think it came from being raised in a kennel with seven other hounds to compete with. She was five when we got her and has since settled around into a real sweetheart. Now she lets Fred have anything he wants

Kelly gives other dogs The Stare and I know that is bad news. She is not happy with other dogs getting near her food/toys/people and makes a lot of noise and commotion but thankfully has never bitten or caused any injuries. I am reading a book about resource guarding so I hope this will help me understand her better.

I love that you've taken the time to try to understand what is behind your dog's aggression. Like people, I don't think that any puppy is born aggressive. I believe that it is a learned behavior.

That being said, I had two, neutered male rescues at the same time who would run and play and 'play fight' for hours at a time. But in the house, if one so much as bumped the other as they were gathering around me for some extra attention, a ferocious battle would ensue. Complete with loud snarling and standing on hind legs and looking like they were eating each other alive. At first, I always broke up these fights and separated the boys. But then I noticed that neither dog ever had an actual bite mark on it! All the bravado and noise seemed to be "bluff". I eventually learned to just leave them duke it out and settle things between themselves. Fortunately (I DID keep a very close eye on them) nobody ever did get hurt. Both dogs have moved on to their forever families (complete with warnings of possible aggression towards other males) and I have been informed that both are just fine with other males that the have contact with!

Brut is so lucky and blessed to have found such a loving, compassionate owner! Thank you for sharing his story.

Something I witnessed "out of nowhere" was when we had Madden for a few weeks and what truly appeared to be out of nowhere, Braylon "went after" Hades. He ran away and hid under a table and when I tried to get him to come out he ran and hid in a closet. It was totally bizarre and I don't really know why it happened except that the hierarcy in our house had been upset by another dog moving in and she was signaling Hades in some way. It never happened again and Hades and Braylon are always amazing together and we don't experience moments of intensity with them, but that particular moment definitely was alarming to me and I still couldn't really explain it.