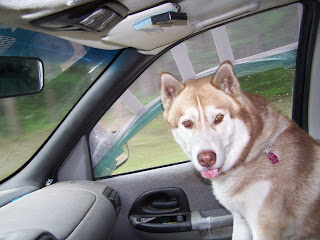 Daddy Dog Brut was next in line to go to work with me.  Although he has told me before that Sunday's are suppose to be his day off, he said he would make an exception just for today.

The best thing I like about taking Brut is that no matter where we go he is so happy he sings and pretends he in on stage in the van.  He prances from the front to back while belting out his tunes for the first 10 miles of the ride.  I had three stops to make before making it to the actual job site.  He was obviously not happy about being constantly interrupted and he would start his concert from the beginning after each stop.  Which was fine with me.  The first two songs are really great, but he really needs some work on the last few.

After about the 10 miles Brut realizes his voice is cracking with the last few songs and decides he'd better rest his vocals for the next trip.  He's going to get it right yet! 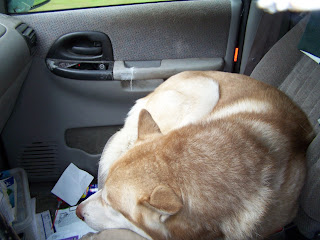 Posted by 24 Paws of Love at July 18, 2010
Email ThisBlogThis!Share to TwitterShare to FacebookShare to Pinterest
Labels: Brut, sings

Brut - you should record your singing! I am sure all the doggies in blog land would just love to hear you sing!

Pip is right, we would all luvs to hear you sing!

We will as soon as Marcoblue remembers the bring the camcorder! He can hardly remember where he left his hat half the time!