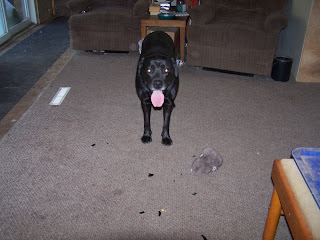 Come on Mommy-I'm ready
Today Silver took advantage of having the house to herself and the fact I was cranking up the music.  PLAYTIME!!

When she was young we used to play hide-n-go-seek.  I would throw a toy one way and run and hide the other until she found me.  Then I would have to chase her to get the toy and throw it again.  My spots were obviously, easy there was only so much time between her finding the toy and then me.  Although there were a few that she had to search for me. One that tripped her up the most was when I hid in the shower and not behind the curtain.  I'd watch her come the bathroom several times and when she finally found me, she grab my hand to let me know that wasn't fair and she was starting to get nervous.  We used to have so much fun. 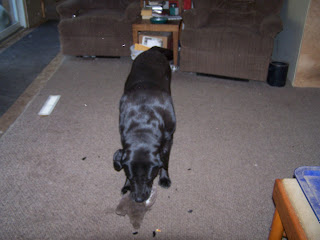 
Today's game was, throw the toy and run to see who can get it first and some play wrestling.  Silver really comes to life having this special one-on-one time.  Though it never last long.  Zappa and Fiona see fun and chasing through the sliding door and want in on it. 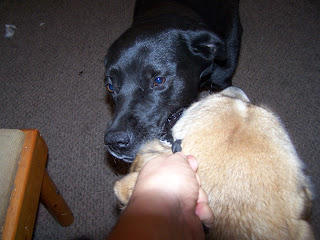 You just HAD to let them in.

Our little time together is short-lived but there will always be more.  Like they say, things always change when you have kids! 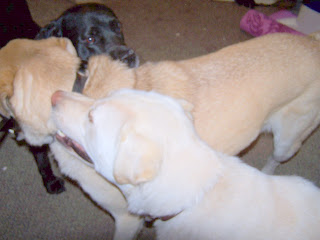 Posted by 24 Paws of Love at July 14, 2010
Email ThisBlogThis!Share to TwitterShare to FacebookShare to Pinterest
Labels: Fiona, playtime, Silver, Zappa

Love this. The story of hide n seek was great and I hope you can still do it. When walking, we would throw a ball and hide in the long grass. It was fantstic to her dive out of nowhere right on top of you. Great blog. Mart

We don't get to do as much as we used to, but we get a few moments here and there. Sounds like you had a fun game too. Aren't dogs great??