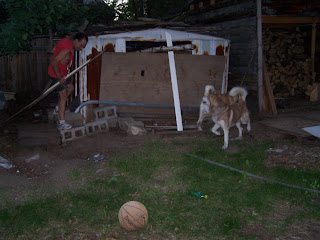 The mission begins...
I began the daunting task of cleaning out the shed, or as the back dogs like to call it, the squirrel condo.  As I started pulling out boards, Brut and Zappa began casing the perimeter looking for run away squirrels.  Trying to keep them contained from reaching the higher built wood shed. 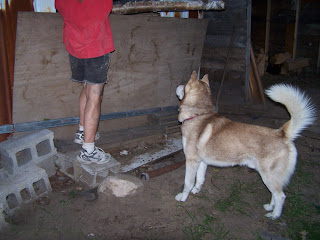 Do you see 'em?  Do you see 'em?
Every board I pulled out would start a frenzy of lapping the shed at least three times.  Keeping their noses to the ground, they searched out their prey.  They know their time is limited as the sun was fading into the night.  Round and round they go, stopping for quick checks, they had to be somewhere. 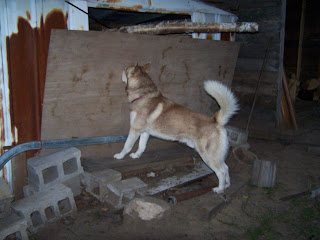 I think I smell one!!


Suddenly Brut stops, tongue hanging out, tail slowly begins to wag until it is up to full speed.  There, in the tree above, two squirrels awaiting their doom.  Zappa has now joined Brut and they both stand patiently waiting for the squirrels to miss the branches as they zoom and hop from through the tree.   Chatting to each other, they laugh at the dogs below and I think I actually saw one of them flip Brut off. 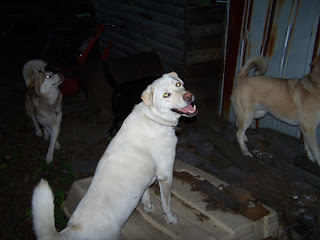 Is the camera rolling?  Is my make-up on right?

Fiona has joined the hunt by this time and keeps close tabs on the two squirrels above.  Between the three of them there can be no escape.  All eyes to the tree.  Keeping vigilant tabs on the two culprits, they execute their attack as planned.  Which seems to be running around in circles and not knowing what to do.  Hoping like a manna from heaven, the squirrels will fall.  Or at least one of them... 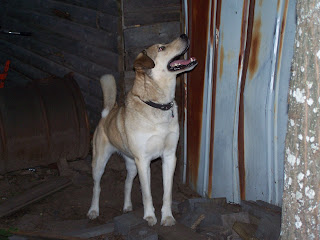 I just want to be friends...

As the darkness falls, so do their chances.  One squirrel hops to the wood shed for freedom up in the rafters, while the other has made a dubious escape right under their noses.  Good team work for the squirrels, good exercise for the dogs.  I could almost hear them high five each other.  Squirrels-1, Dogs-0.  Better luck next time. 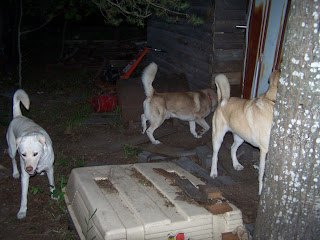 Struck out again.  Tomorrow, same place, same time.
BE THERE!!


There will always be tomorrow.  And look here comes the Commander in Chief Silver, to gather the troops and head on home where even in defeat Daddy will give us our bones of honor for putting our hearts into mission. 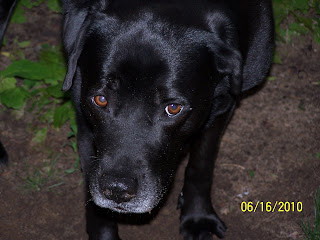 It's a hell of a job, but someone has to do it.
by Mark
Posted by 24 Paws of Love at July 03, 2010
Email ThisBlogThis!Share to TwitterShare to FacebookShare to Pinterest
Labels: Back Dogs, dogs, hunt, mission, squirrels

wonderfully written and a great story. I can see this is going to be a book eventually and sell for millions. Love the dogs and they look so healthy and adorable. Hope this goes on and on.

I hate Squirrels myself. We get little red ones over here which are cute but the greys, well, they're just tree rats really.

Thanks Mart-we have every color under the rainbow of squirrels and chipmunks. They are a pest, but great fun for the dogs!!