"Blog the Change" blog hop was our first blog hop and it was an exciting experience.  Real people for real causes.  Out of all the causes, there was one that haunted me the most after I read it.  It is:  Dogs:  A letter from a Shelter Manger on No Dog About It blog.  It is a graphic description of when you drop your dog off at the shelter and expect it will find a good home.  This was one shelter and there a thousand more just like it. 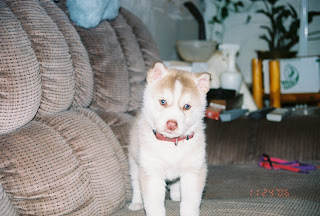 Any one of my dogs could have ended up in a shelter before we got them.  With Brut's aggressive tendencies, the possibilities of him ending up beaten and throw away would have been likely.  Without the right care, concern and patience he probably wouldn't have made it or ended up in dog fighting.  It is never easy caring for a dog with these special circumstances, believe me I've wanted to throw in the towel many a times, but he was my responsibility and I could never come close to actually doing it.  I could never pawn him off to someone else, especially knowing exactly how he was.  I couldn't do that to him or someone else.  I believe it wouldn't be fair to anyone, especially Brut.  We were his family, he didn't know anything else.  Getting rid of him was never an option and that meant digging in deeper to get to the heart of his problems.  I could not fathom losing him no matter what the circumstances.  Brut has blossomed into a wonderful, gentle, caring dog, with a sly, conniving side and I wouldn't have him any other way. 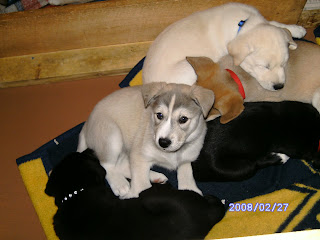 Blaze looking up, Chance sleeping on Zappa with blue collar at 7 weeks


When we had our litter of puppies, it was by choice and we both knew we were responsible for all 10 puppies, not just from birth to their new homes, but for their lives.  If for any reason the owners were not able to care for them, we would take them back.  No questions asked.  We were never so grateful as when we got the call from Blaze's and Chance's owners to return them and they didn't end up in a shelter.  Both of them could have easily ended up there. The abuse they were suffering made them completely out of control.  It has been challenging to say the least, both of them having such high anxiety levels and are learning to trust again, but it has been worth it.  Nobody could believe that after already have 4 dogs that we would take two more in.  We were responsible for them and it was our responsibility to take care of them.  We were the reason they came into this world and we were accountable to them.  No questions asked.

When ever we have moved, it meant finding a place not just the dogs, but the cats and the duck.  The thought of actually getting rid of any would be like cutting off one of our arms.  They are part of lives.  There are too many animals suffering.  I wish I could bring them all home.  So I would ask anyone to read this letter and think twice before dropping your animal off.  I believe there is always a way if you keep searching for it.   Hugs to all of you that may be in difficult circumstances and wavering about what to do.  I hope you will think twice and realize that you are all your pet has and your the last one he wants to lose.  Please don't give up.