Now for those of you that don't know, a few of the dogs have an insatiable appetite.  Since I'm notorious for leaving "treats" in the car, the dogs are great sleuths for finding them.  Chance is one of them and he was escorting me today on our adventure.  So when I LOCKED my fresh bought pizza in the cooler for later, I presumed it was safe.  Never underestimate a dog that has the nose of a bloodhound, the conniving mind of a husky and the ravishing appetite.

I made a stop at Brut's dad's house to talk with the breeder, I had no idea the hungry detective was at work.  I was only inside for a few minutes and I'll be damned...he was devouring the last of my just bought pizza.  I was a little perturbed and when I saw him and he hung his head a bit and got back in the front seat.  I shook my head in puzzlement and frustration as to how he got the cooler open.  The handle swings one way to lock and the other to open the lid.  No, it's not the most complex contraption, but just goes to show never estimate a Chance that was starved before he came back to us.

As Chance lay his head in my lap, licking the pizza sauce from his lips, I swear he was smiling.  He was proud of himself and enjoying his full belly.  As I patted his head, I couldn't get too mad at him because I believe he thought we were playing a game of "find it" and he was quite pleased he had mastered a new skill for the game.  While my belly grumbled for the rest of the ride, I had to smile and was reminded  how smart a dog can really be. 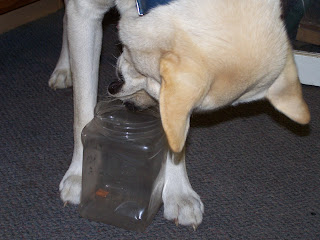 Chance and a game of "Find It"

Posted by 24 Paws of Love at July 13, 2010
Email ThisBlogThis!Share to TwitterShare to FacebookShare to Pinterest
Labels: Chance, dogs, food