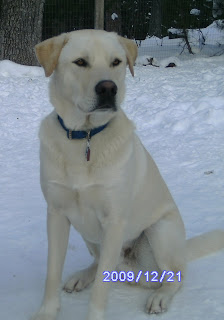 Chance and I have been working hard on our walk training program.  To learn how and why we got started you can read What's Your Weakness and to read about our training method you can read Learning to Walk Chance.

Our last time out was a week ago due to the extreme cold as the dogs weren't able to stay out for more than 5 or 10 minutes.  We made a lot of progress that last time.  We made it two houses down the road.  Mind you there is a lot of back and forth and turning around to keep his attention off that natural forward drive.  This is also teaching him that no matter what way we walk, it is to be all the same.

Daddy was walking the Back Dogs and when we encountered them, Chance barked and I made him sit while they walked in front of us.  The great thing was that he did not pull or make any effort to move after them.  That was fantastic.

So today, was a bit of the same scenario, Daddy was walking Back Dogs (one dog at a time) while I was out with Chance.  Chance was excited and was pawing at the gate before I put his leash on.  Once he calmed and I had his leash on, I walked him around the yard once and brought him to the gate.  We stopped, he sat and looked at me.  I opened the gate waited until he looked at me again to give him the signal to walk.  He did excellent.  I think he has this part down.  I use the walk around the yard because this let's him know we are in training mode and the type of walk we are going to take.  It also helps him to focus, especially since Daddy was walking Brut who marks everything and Chance is very interested in these markings.

So we walk out the gate making several stops for him to investigate these marks.  Once he's checked them out he is fine to pass by again without the need to recheck them.  I use the command "release" where he can go where he pleases using the whole length of the leash.  I use it at the major pee spots and when he needs a break.  Or if I need a break.  Sometimes I call him back when I am ready and other times I wait for him to sit which tells me he is ready.  It depends on the circumstances.

Today we made it three houses down with very little corrections and I could really feel him getting into the groove.  He was doing fantastic.  Daddy came out of the woods with Brut while we were down the road walking towards them.  They were a few houses down, but Chance was calm and stayed with me.  Honestly, I don't even know if Chance even saw him.

Next Zappa came out with Daddy and Chance and I walked by them with no problems at all.  Chance never pulled or picked up speed.  He stayed right with me.  Things were going so good, I decided to test out Chance a little more.  We headed down a steep path through the woods that Chance would have normally pulled ahead, or off to the left or right or anywhere but next to me, but he there was, right next to me going at my pace, downhill.  AMAZING!!  I could hardly believe it!  The same dog that pulls me with feet flying was actually at my side without even a tug forward.  This was getting to be too much.

At the bottom of the hill, trying to close my gaping mouth in shock, I had two choices:  go back up the hill, or take a short path through the woods that would lead back to our road.  Well, I decided to take the path.  Lord, help me!  We did great until I gave him the release command.  MISTAKE!!  And the worse part was I knew it was before I did it.  Getting Chance to come back to me was a bit difficult.  He was tugging every which way.  Deer and rabbit scents were everywhere.

At this point we'd been going for a good 45 minutes and about the time my patience was wearing thin.  I found myself suddenly getting rather tired and so was Chance and we haven't reached the road yet.  I started walking him back and forth to desensitise him a bit but with little success.  We had to get out the woods. The only way I was going to succeed at this point and keep myself together was putting him on the release command and letting him walk me out, until we were close to road.  Then I called him to me, made him sit and gave the "walk" command.   We walked out of the woods and down the road back to the house.  We had both succeeded!

I had found a way to get out a tricky situation and it worked!  We walked for almost an hour and Chance was superb!  And I think I did pretty good myself!  It was a great feeling!  Tell you what though, I was exhausted afterwards.  It really took something out of me when we were done and I wasn't the only one.  Chance was sleeping under the table during dinnertime!  For a dog who worships mealtime, that has never happened.  Talk about having some hope.  For so many years I have tried and failed at this over and over and now it just seems to all be coming together.  Blaze and the Back Dogs are in for a rude awakening when I get Chance where I want him, because they are next!!  :)
Posted by 24 Paws of Love at January 25, 2011
Email ThisBlogThis!Share to TwitterShare to FacebookShare to Pinterest
Labels: Back Dogs, Chance, leash, pull, walks

Congrats on work well done by both you and Chance. And amazing that he was still on target with you even after the lull in walk time due to the cold. Keep up the wonderful work.

Yeah! Good for you both.

I remember those days with Shadow where I turned in the opposite direction so many times in a row I got dizzy and nearly fell down.

And one thing I've noticed from the best blogs that professional trainers write is that figuring out how to recover from a mistake is key to being a good trainer. It's my biggest failing so I will do my best to pay attention to your lesson here.

Congratulations! And I'm looking forward to hearing how the Back Dogs do with walk training.

I will have to try this with Aschiuta, but only after she gets out of her heat. Right now it's house arrest and she is going a bit crazy.

That is Awesome that Chance is doing so Well with his leash training. It has also been super cold here in NH, that my gang doesn't even want to go outside.

OOoh, training... mommy teaches me lots of things at home, but we're actually starting a class next week. I'm not sure what to expect!

How brilliant! I am so happy for you! I am also in awe at how easily you were able to recover and think on your feet. That's one of my biggest failings. Once I am frustrated and tired, it is a struggle to keep calm and use my brain. So that is awesome you did it without a lot of stress.

Yay for you and Chance!

Awesome to hear about Chance's progress! :)

I'm glad you've made such great progress! I have a feeling it will get easier as you go along. :)

I think the pups know when we're happy with them - it's a feel good situation all around!